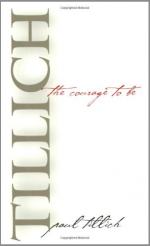 The Courage to Be (Tillich) Summary & Study Guide

Tillich, Paul
This Study Guide consists of approximately 30 pages of chapter summaries, quotes, character analysis, themes, and more - everything you need to sharpen your knowledge of The Courage to Be.

The Courage to Be (Tillich) Summary & Study Guide Description

The Courage to Be (Tillich) Summary & Study Guide includes comprehensive information and analysis to help you understand the book. This study guide contains the following sections:

This detailed literature summary also contains Topics for Discussion on The Courage to Be (Tillich) by Tillich, Paul.

The following version of this book was used to create this study guide: Tillich, Paul. The Courage to Be. Yale Nota Bene edition. Yale University Press, 2000.

Beginning with a historical overview of various understandings of courage from Plato up through modern philosophers like Friedrich Nietzsche, theologian and philosopher Paul Tillich argues for a definition of courage that is rooted in the ontological situation of the single individual. He demonstrates how, at various points in time, courage has been correlated with fortitude (Plato and Thomas Aquinas), wisdom (Stoicism), individual self-affirmation (Spinoza), and life itself (Nietzsche). Tillich draws from position to develop his own existentially-oriented point of view that situates courage as both an ethical and an ontological reality that is rooted in the full breadth and depth of the human experience.

Tillich then moves to discuss the major obstacles to courage, namely anxiety and the threat of nonbeing. Because human beings are finite entities they are, necessarily, subject to various forms of anxiety such as fate (the contingency of existence), death, emptiness and meaninglessness, guilt and condemnation, and, especially, despair. Throughout his description of these anxieties Tillich discusses various philosophical antecedents and solutions. He argues that each form of anxiety can be overcome through individual acts of courage. Anxiety becomes pathological, however, when the possibility of nonbeing is so strong that an individual is unable to compensate, slipping into paralysis and fear. The proper antidote to pathological anxiety, for Tillich, is the essential vitality of life, which includes both a biological and an individual existential aspect.

In order to properly seize upon and actualize this essential vitality one must instantiate the courage to be. For Tillich, the courage to be exhibits a dyadic ontological structure, a sort of dualism that is indicative of Tillich’s larger philosophical position. One the one hand, there is the courage to be as a part, i.e., courage correlated with participation. This form of courage is located in the individual’s own self-affirmation as exemplified in his or her participation in collective society. Tillich believes that courage considered in this way can be found in collectivism, semi-collectivism, neo-collectivism, and democratic conformism. In each instance, the individual feels and performs courage to the degree that he or she is a part of a larger whole that helps sustain his or her specific existence.

On the other hand, there is the courage to be as oneself, i.e., courage correlated with individualization. Under this rubric courage involves each person’s individual self-affirmation over and against any and all outside forces or conventions, including those erected by collective society. Tillich surveys various historical positions that have considered the courage to be as oneself, including romantic and naturalistic theories of the self-following the Enlightenment, modern individualism, and, especially, existentialism, which he believes is perhaps the best available approach. Drawing on existentialist philosophers, literature, and art, Tillich argues that existentialists offer a solution to crippling despair and pathological anxiety, by considering the whole of existence from the point of view of the single individual.

While each end of the dyadic structure of courage—participation and individualization—provide important resources for overcoming anxiety, fear, and despair, Tillich believes that neither pole is able to fully reconcile with its counterpart. A truly transcendent power or ground is needed in order to unite the two so that courage can be fully asserted in the face of anxiety and the threat of nonbeing. For Tillich, the solution takes the form of the power of being-itself, the ground of being which takes the anxiety and threat of nonbeing into itself and transmutes its determinations. Tillich shows that this power has historically been referred to as God in Western philosophical and religious traditions, but he convincingly and persuasively argues that the power of being-itself transcends the theistic idea of God and cannot be referred to in personal terms, i.e., as an individual being among beings. At the conclusion of his argument, Tillich refers to this power as “the God Above God” because it enjoys that position historically attributed to God, but does not abide by theistic conventions. It is rather the ground and depth of existence from which the individual unites both ontological poles of courage and is therefore able to instantiate both self-affirmation (the courage to be as oneself) and self-participation (the courage to be as a part).

More summaries and resources for teaching or studying The Courage to Be (Tillich).

The Courage to Be (Tillich) from BookRags. (c)2022 BookRags, Inc. All rights reserved.