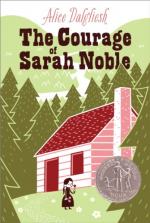 Alice Dalgliesh
This Study Guide consists of approximately 31 pages of chapter summaries, quotes, character analysis, themes, and more - everything you need to sharpen your knowledge of The Courage of Sarah Noble.

The Courage of Sarah Noble Summary & Study Guide includes comprehensive information and analysis to help you understand the book. This study guide contains the following sections:

This detailed literature summary also contains Quotes and a Free Quiz on The Courage of Sarah Noble by Alice Dalgliesh.

Eight-year-old Sarah Noble and her father are setting out for Connecticut to go and build a house on the plot of land her father has purchased. Along the way Sarah Noble must deal with the challenges of growing up as she must now depend on herself for a lot more things. Obstacles appear in her way such as sleeping out in the wilderness to confronting her fear of Native Americans.

The first night Sarah and her father are in the wilderness she hears noises and distracts herself by saying that it is simply an owl or a fox or a skunk. The next day the two arrive at a small settlement owned by the Robinson family. While Sarah is there she observes the household and decides that is not what her own home will be like; getting by the children about how Indians will harm her and living in a place lacking love. She takes comfort and courage from the cloak her mother put around her before she left and deals with family as best she can.

As Sarah and her father arrive to the plot of land he builds and shed and Sarah is faced with her first real issue. While Sarah’s father goes to work on the settlement to build the house he will be gone all day and will have to leave her alone. Sarah gathers her courage and tells him she will be fine. As he leaves Native American children arrive to see Sarah reading her bible. She reads to them, but when she is finished and tries to talk with them they all flee at her impatient tone as none of them speak the other’s language.

Over time as the house is built Sarah makes friends with the children and starts to learn more about Native American culture. Sarah meets Tall John’s children, who are her favorites and have a close relationship with them, which comes in hand for Sarah’s next obstacle. With the house built Sarah’s father must leave to go and fetch the family, leaving Sarah with the Native Americans. She is sad to know that she will be left behind but has courage and stays with Tall John and his family.

Over the months she becomes accustomed to their way of life, from the eating style to wearing their clothes. Still she holds onto the fear that the Native Americans from the north will come and attack them, though Tall John does his best to tell her not to worry. It’s one day in October however when Sarah’s father returns to take her back to the finished cabin and their family. Tall John comes with the two to see his "daughter" off, and when Sarah returns she sees all of the changes her family went through. Her mother comments on what she’s wearing and how she is glad her daughter returned safe from living with people she believes to be heathens. The book ends with Sarah lying by the fire drifting off to sleep after talking with her parents about how grown up she is and her hopes to be married and have a job as a teacher in the future. In the end she drifts off with her cloak hanging on the wall.

More summaries and resources for teaching or studying The Courage of Sarah Noble.

The Courage of Sarah Noble from BookRags. (c)2022 BookRags, Inc. All rights reserved.