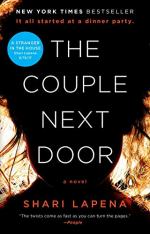 Lapena, Shari
This Study Guide consists of approximately 47 pages of chapter summaries, quotes, character analysis, themes, and more - everything you need to sharpen your knowledge of The Couple Next Door.

The Couple Next Door Summary & Study Guide includes comprehensive information and analysis to help you understand the book. This study guide contains the following sections:

This detailed literature summary also contains Quotes and a Free Quiz on The Couple Next Door by Lapena, Shari .

The following version of this book was used to create this study guide: Lapena, Shari. The Couple Next Door. Pamela Dorman Books, 2016.

The novel begins with Anne and Marco Conti attending a dinner party at their next-door neighbors’ house. Anne and Marco bring their baby monitor with them and alternate checking on baby Cora every half hour. Anne drinks as she watches her neighbor Cynthia Stillwell flirt with Marco. When the Contis return home, they find an empty crib and call the police. Anne calls her wealthy parents as well. Marco does not get along with Anne’s stepfather, Richard Dries. Marco feels that Anne’s family has never accepted him. Rasbach, the lead detective on the case, speaks to witnesses in the neighborhood and is suspicious of both Anne and Marco. Anne’s parents offer millions of dollars as reward money for Cora.

Rasbach learns that Marco’s company is in desperate need of money and Anne struggles with postpartum depression. The detective believes that Cora’s disappearance may have been a joint effort between the two parents to get rid of the baby and get money. Rasbach goes to Anne’s old school and learns that once Anne had attacked a girl who bullied her and then failed to remember it afterward.

Anne receives a package in the mail with Cora’s onesie and a ransom note. Marco reveals through his thoughts that he staged the kidnapping with an accomplice, but it had gone awry and Cora has been missing for much longer than they had planned. Marco goes to meet his accomplice with the ransom money, but when he arrives at the destination, someone hits him over the head and takes the money, leaving him without Cora.

Marco sees in the newspaper that someone murdered his accomplice. Then, Cynthia Stillwell invites Marco over. She shows him video footage that was taken through the Stillwells’ hidden camera on the night of their party, which displays Marco kidnapping Cora. Cynthia blackmails Marco for money. Anne sees Marco leaving Cynthia’s house. She accuses her husband of having an affair with Cynthia and shows him the hidden phone that she found in his home office. Marco used this phone to contact his accomplice in the kidnapping. He finds a missed call on it and when he redials the number Richard Dries picks up. Richard says the kidnappers contacted him, he knows all about Marco’s involvement in the kidnapping, and he will get Cora back himself.

Anne finds Marco and admits that she cannot remember what happened when she checked on Cora on the night of the Stillwells’ party. She fears that she killed her baby and repressed the memory because she has had a dissociative disorder since she was young. Then, Anne goes next door to confront Cynthia about the affair. Cynthia shows Anne the video of Marco kidnapping Cora. Anne confronts Marco. She remembers that Marco’s accomplice, whose picture she saw in the newspaper, is her stepfather’s friend.

Anne and Marco go to the Dries’ house. Anne's mother Alice discovers that Richard is having an affair with Cynthia Stillwell and used the kidnapping to take money from Alice so that he can leave her. Anne finds Cora with Richard and returns home with her baby. Rasbach arrests Richard and offers Marco immunity from persecution for the kidnapping if he helps the detective’s case against Richard. Anne struggles to forgive Marco for his mistakes. She goes next door to speak to Cynthia. Cynthia says she was not involved in the kidnapping because if she had been she would have killed the baby and gotten away with it. Anne kills Cynthia and forgets the memory.

More summaries and resources for teaching or studying The Couple Next Door.

The Couple Next Door from BookRags. (c)2022 BookRags, Inc. All rights reserved.