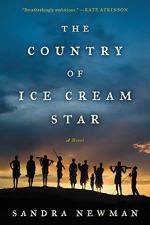 This detailed literature summary also contains Quotes and a Free Quiz on The Country of Ice Cream Star by Sandra Newman.

“The Country of Ice Cream Star," a novel by Sandra Newman, is the story of fifteen-year-old Ice Cream Star. Ice Cream, known as Ice, sets out to find a cure for the disease that kills everyone before the age of twenty-one. Set several decades into the future, Ice grows up with her brother in what was formerly the United States of America, now called the “Nighted States.” Most people in the country speak in stunted and fragmented English, including Ice. Originally from the shores of the Chespea Water (the former Chesapeake Bay), Ice and her tribe –the Sengles –have moved to Massa Wood, formerly the western part of the state of Massachusetts.

Ice and her people live in peace and friendship with the neighboring Lowells, who live at the old Lowell Mill. However, Ice and her people live in a tense peace with the Nat Mass Armies, a tribe of warrior-minded people. Complicating the situation is that Ice is in love with Mamadou, the NewKing of the Armies. Meanwhile, Ice’s brother, Driver, leads their own tribe. Driver ultimately becomes stricken with the disease known as posies, meaning his days are numbered. He has long sought to merge with El Mayor, leader of the Lowells, in order to better defend against the Armies during the frequent wars that break out. Now he is desperate to do so.

While out scavenging through Sleeper homes –the houses and properties of people who fled to Europe when the disease first broke out –Ice and her people discover a man named Pasha. Pasha, who is white, is striking to Ice and everyone else because they are black. Also, Pasha is thirty years old. This is unheard of to Ice and her people because most die in their early twenties. At first, they are very suspicious of Pasha, but slowly warm up to him realizing he is not at all like the roving bands of white slavers that came through the area years before. It is through her conversations with Pasha that Ice learns he is a scout for the Russian Federation’s operations in America, and that the Russians have a cure for the disease. Pasha also warns Ice that the Russians are forcing captured locals to fight for them, and slaughtering them if they refuse. He explains that a massive Russian military movement is headed south, and that Ice and her people must flee.

Ice tasks herself with two causes: saving her people and saving her brother. She begins sleeping with El Mayor, convincing him and most of the Lowells to join forces with the Sengles and move south. As they move south, the Nat Mass Armies warriors pursue. The Armies are stopped and executed by the Marianos, soldiers from the City of Marias, formerly New York City. The City of Marias is a theocracy ruled by twelve apostles. The apostles utilize a warped version of Catholicism in which any black girl found living with a white man is considered to be Mary, Mother of Jesus, while the white man is seen to be Jesus. Ice is believed to be the latest incarnation of Mary, so she is elevated to rule Marias and its four-hundred-thousand people.

Ice and Pasha continue to warm toward one another, with Pasha confessing that in the past, he was a ruthless killer for the Russians, and murdered the mother of his daughter when she did not try to protect their daughter from being raped during a war. Pasha now seeks to atone for his past. He loves Ice, and in some ways sees her as a daughter. He and Ice work to urge the Marias to join with Quantico, a warrior city of young Marines. Quantico is made up of the former areas of southern Maryland, Washington, D.C., and northern Virginia. With Marias under her control, Ice heads south to make a treaty with the Marines of Quantico. An alliance is made. While in Quantico, Ice speaks with a Russian prisoner named Razin, whom she says she will protect if he can get her the cure. He settles on ten cures.

In the final battle, the Russian Federation easily defeats the combined armies of Quantico and Marias. Ice is captured. Because Razin has survived, he has sent on ten cures to New York. He now decides he will bring her to Europe to use her as propaganda on behalf of the Russians, which the rest of the world looks unfavorably upon for their brutality in Africa, South America, and the United States. Pasha goes with Ice. While the details are never provided, Ice concludes her story by saying that she was able to bring the cure to everyone in the Nighted States, to save them all.