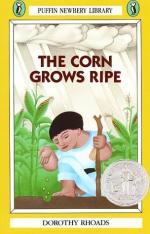 The Corn Grows Ripe by Dorothy Rhoads focuses on Tigre, a lazy, 12-year-old Mayan boy. When his father is injured, Tigre must become the man of the family by clearing the bush and planting a cornfield. Tigre learns how to be a man and overcome life's challenges.

Dionisio is a 12-year-old boy from a small Mayan village. He enjoys oversleeping and lying around in his hammock. Meanwhile, his whole family rises early to work, even his little sister. Mother and Father spoil Dionisio because his three brothers died of fever during the course of one week. Great-Grandmother tells his parents that Dionisio must learn to work hard. She treats Dionisio sternly because of his laziness and selfishness.

Dionisio's nickname is Tigre (Jaguar) because he looks like a jaguar and he is curious and mischievous. Everyone calls him Tigre. Tigre helps Father clear the bush, so they can plant a cornfield, called a milpa. The next day, Tigre is too exhausted and goes to school. A tree falls on Father and he breaks his leg. Tigre feels guilty. He volunteers to go to the head village to find the medicine man, who is also a bonesetter.

He walks 17 kilometers one way at night through the bush. He is scared, but completes the task, realizing his journey will be easier on the way back. Father will not walk until harvest. Tigre must clear the bush, burn the land and plant the cornfield. Tigre also must continue his school lessons after he works. At first Tigre thinks it is too hard and he cannot do it. Father would not give up, so Tigre keeps going. His work/study schedule becomes easier.

He clears the bush. He burns the land before the rains come, which makes him successful. He plants the cornfield. He also plants chili peppers, squash and beans to sell to others, but this is a surprise for his family. At his school lessons he asks questions and challenges himself. He understands nature with scientific reasoning, unlike his family who explains nature with the gods.

Summer is hot and dry with no rain. The villagers grow worried over the drought. They start to pray and make sacrifices to the corn gods, but still no rain comes. The men and boys of the village have a prayer ceremony in which they choose Tigre to play a frog. The frog represents luck with the corn gods. Only the older boys are usually frogs, so this is a great honor for Tigre. On the third day, rain finally comes in a great avalanche. The villagers rejoice.

Tigre and Father walk out to the cornfield. It is Father's first time seeing the harvest. They are speechless. Large squash and beans grow—and the corn is ripe.