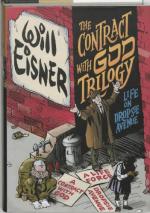 Will Eisner
This Study Guide consists of approximately 23 pages of chapter summaries, quotes, character analysis, themes, and more - everything you need to sharpen your knowledge of The Contract with God Trilogy.

The Contract with God Trilogy: Life on Dropsie Avenue Summary & Study Guide includes comprehensive information and analysis to help you understand the book. This study guide contains the following sections:

This detailed literature summary also contains Topics for Discussion on The Contract with God Trilogy: Life on Dropsie Avenue by Will Eisner.

"The Contract with God Trilogy: Life in Dropsie Street" is a graphic novel by Will Eisner, which depicts the rise and fall of the Dropsie Avenue neighborhood in the Bronx. Each of the stories in the novel focus around Dropsie residents, and how their lives play out and intersect with one another.

In the first part of the novel, "Contract with God", Eisner tells four stories. The first story is of Frimmie Hersh, who loses his young daughter, and is horrified because he believes that God has broken a contract with him. There next story is about Eddie, the Street Singer, who has a chance for greatness, but his alcoholism and abusiveness cloud his judgment. There is the story of a brutish superintendent who is robbed by a sexually-active young girl, and then commits suicide when the police are called on him. And there is the story of the residents of Dropsie Street in summer, whom all leave the city for upstate New York.

In the second part of the novel, "A Life Force", Eisner weaves together the stories of multiple people and incidents. For example, there is the carpenter Jacob who assists his rabbi neighbor with building a room for the rabbi's mentally imbalanced wife; and Jacob begins a lumber business with fellow carpenter Angelo, who becomes involved with the mob. Jacob's daughter, Rebecca, marries a Christian man named Elton Shaftsbury, and Elton helps to keep Jacob's business in order. Jacob almost leaves his wife, Rifka, to marry Frieda Gold, newly arrived in America, and Jacob's old flame. In the end, Jacob stays with his wife.

In the third part of the novel, "Dropsie Avenue", Eisner tells the story of the rise and fall of the neighborhood itself, beginning in the 1870s when most of the Bronx was still farmland. Over time, English settlers bought the land and built houses, which were in turn bought and lived in by the Irish. Over time, the neighborhood's private homes were sold and torn down for tenement buildings and railway stations, which in turn draws in minorities, drugs, and crime. Hoping to navigate the tricky waters is Abie Gold, a Jewish lawyer, who together with former Dropsie resident, the elderly Mrs. Rowena, buy the area and build single-family homes. Inexorably, the cycle begins to repeat itself once more.

More summaries and resources for teaching or studying The Contract with God Trilogy: Life on Dropsie Avenue.