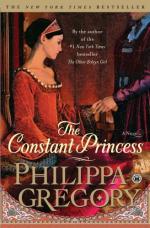 This detailed literature summary also contains Topics for Discussion and a Free Quiz on The Constant Princess by Philippa Gregory.

In 1491, Catalina, who will become known to the world as Katherine, is traveling with her parents on the battlefield. They are fighting for Christianity. Her childhood, spent in conquered lands and watching her parents in one crusade or war after another, will uniquely prepare her on her own quest for the crown of England's queen. From the time she is three years old, she is betrothed to Arthur, Prince of Wales and son of the king of England. She will often say that there was never a time she didn't know that she was Princess of Wales and future Queen of England. When she meets Arthur, she's taken by his good looks but soon realizes that she finds few admirable traits in him. They travel to Ludlow, and it's on the way that Catalina becomes so cold that she can't get out of the litter. Her tear-stained face is Arthur's undoing. He says that he hadn't realized he has the power to make her cry, that he's sorry and will protect her from this day. And he does. With that vow, there's a new friendship between the two that quickly blooms into love. Though they are under orders to spend only four nights together each month, Arthur slips into Catalina's rooms nightly and the two find that they share ideas and goals to be accomplished during their reign as king and queen of England. Then Arthur becomes ill and dies a few days later. On his deathbed, he tells Catalina that he wants her to promise that she'll still become queen. He instructs her to tell everyone that the marriage was never consummated, clearing the way for her marriage to Harry, Arthur's younger brother.

Harry is self-absorbed and, at eleven, is suddenly heir-apparent to the throne. He is then protected and pampered even more than before. He is enamored with Catalina, and she begins to plan how to make a marriage with him happen. Meanwhile, Arthur's mother dies in childbirth and his father, King Henry, asks for Catalina's hand in marriage. Realizing that her son would be in line behind Harry for rule of the throne and would never rule unless Harry died without an heir, Catalina refuses the King's offer, holding out for the marriage that would put her son on England's throne. Harry's father approves the betrothal but never means to go through with it. However, six years later, he dies and Harry quickly arranges his marriage to Catalina. On their wedding night, Harry has his suspicions about Catalina's virginity, but doesn't press the issue. Upon their coronation, she becomes Queen Katherine and he becomes King Henry.

As a new king, Henry is impetuous, but Katherine quickly takes control of the court and of the kingdom, handling day-to-day operations while Henry entertains himself and his friends. Katherine then delivers a little girl who is stillborn and later a son who lives only a few days. Henry involves himself with another woman who claims to have been a virgin, saying that the marriage of Henry and Katherine wasn't binding because Katherine had not been a virgin. Katherine convinces him that the woman was conniving and that allowing her to gossip about the queen undermines the throne. She skillfully manipulates the situation so that Henry again pledges his love to Katherine, and to her alone.

Katherine eventually agrees that England will stand with Spain—the country of her father—against France. It's while Henry is gone to fight this battle that Katherine joins the forces of England to quash a Scottish invasion. She writes to Henry that she will be traveling to a particular shrine, hoping that he will understand that she means to give thanks for yet another pregnancy. In 1529, she appears in court, ordered to defend her claim to the throne as Henry seeks to put aside their marriage in order to marry Anne Boleyn.