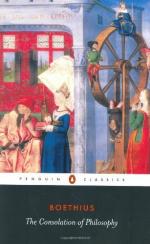 Anicius Manlius Severinus Boethius
This Study Guide consists of approximately 30 pages of chapter summaries, quotes, character analysis, themes, and more - everything you need to sharpen your knowledge of The Consolation of Philosophy.

The Consolation of Philosophy Summary & Study Guide includes comprehensive information and analysis to help you understand the book. This study guide contains the following sections:

This detailed literature summary also contains Topics for Discussion and a Free Quiz on The Consolation of Philosophy by Anicius Manlius Severinus Boethius.

Boethius is despairing while he waits in prison for his execution. Philosophy, embodied in a beautiful woman, comes to show him that his sadness is misguided. In the course of a lengthy discussion, she proves to him that true happiness is found in contemplating God.

Boethius is, at first, reluctant to understand the points Philosophy is trying to make. His misery is quite real to him and has made him forget all that he once knew as a philosopher. Sensing his state of mind, Philosophy decides to proceed gradually. She begins by showing how foolish it is to stake one's happiness on Fortune. Fortune, as all should know, can be both both generous and merciless. One should never count anything as his own, but rather regard it as a temporary loan from Fortune which can be taken away at any time. Indeed, even if one never lost one's wealth, the wealth would still be worthless, for that is not what can make a person happy.

Most men believe that one of five things—or a combination of the five—is the formula for happiness: money, honor, power, fame, or pleasure. However, none of these goods can really make a person happy, and there is plenty of evidence simply in the fact that people who possess them are often miserable. However, since men are naturally directed to seek happiness, there must be something about each of those five objects that is legitimately good. She then reasons that the ultimate good must contain all of those goods, but not, so to speak, piecemeal; rather, the ultimate good must be unified. She reasons that the ultimate good must be nothing other than God, for he is—by definition—the most perfect being and the most perfect being must also be the best being. If he is the best being, then it is logically necessary that he is also the highest good, which, in turn, implies that he is also happiness.

Boethius accepts everything so far but cannot help feeling dissatisfied with his misfortune. If God is so good, he asks, why does he allow the just to suffer while the wicked so often prosper? Philosophy argues that, though it may seem that way, in fact the opposite is true: Everyone always receives exactly what they deserve. Since happiness is found by seeking the good, the virtuous are rewarded simply by living good lives. No worldly reward could rival the greatness of being close to God. In a similar fashion, the wicked are punished by virtue of their own actions. To live an evil life is the greatest misery; however, the wicked, she argues, are actually made happier when they are punished. Punishment will tend to curb their evil ways and, therefore, they might turn their lives around and start living virtuously. The worst thing that can happen to an evil man is to be allowed to continue working his evil deeds. The winds of fortune are not meaningless, even if they do sometimes seem to be unfair. God is always in control and he allows the innocent to suffer to test their virtue. By emerging triumphantly, they manifest their goodness—and God's goodness—to the entire universe. God's purposes are not always clear, but one might always have faith that he directs everything according to his perfect intelligence and perfect goodness.

With the substance of her argument proven, Boethius is still troubled by the question of free will. If God orders the entire world and everything happens for a reason, this would seem to imply that man does not act freely. If he did, he could potentially disrupt God's plan. Yet, if God knows what man will do before he acts, it would seem that he acts, not because he wants to, but because God has preordained it. Philosophy says that this seeming contradiction only arises because of man's limited intellect. Man is time-bound and cannot conceive of how the eternal God knows what will happen. He does not see things unravel moment to moment, but rather, each moment in the world's history is always present to him. While everything man does is in accordance with God's plan, it is also done in accordance with man's own rational nature and, therefore, is a free act.

More summaries and resources for teaching or studying The Consolation of Philosophy.

The Consolation of Philosophy from BookRags. (c)2022 BookRags, Inc. All rights reserved.