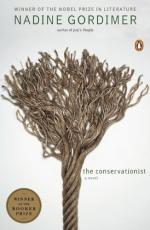 Nadine Gordimer
This Study Guide consists of approximately 36 pages of chapter summaries, quotes, character analysis, themes, and more - everything you need to sharpen your knowledge of The Conservationist.

The Conservationist Summary & Study Guide includes comprehensive information and analysis to help you understand the book. This study guide contains the following sections:

This detailed literature summary also contains Topics for Discussion and a Free Quiz on The Conservationist by Nadine Gordimer.

When Mehring, a businessman who owns a "hobby" farm in South Africa, is made aware that a body has been found on his property, it forces him to examine his own life and mortality. As the cultural revolution of the 1960s and 1970s sweeps the world, the apartheid system in "old" South Africa is starting to crumble. Mehring takes in this changing scene as he deals with the black workers on his farm, his activist girlfriend, his bitter ex-wife in the U.S. and his rebellious son. Mehring must think hard about what he really wants out of life.

Farm owner and industrialist Mehring is informed by Jacobus, his head work hand, that a body has been found by the river on his property. Mehring examines the body, noting the nice clothes. No one knows who the man is. Mehring calls the police and is annoyed that they see no urgency in sending an officer to the farm. They finally agree to visit the next day.

Mehring is from the city. The farm is his escape from the stress of everyday life. His business friends think his farm is "quaint," but to him there is a lot more to it than just the tax write-off. He talks with Jacobus about the dead man as they review farm tasks. Mehring is appalled that the police just buried the body on his property, near where it was originally found.

Mehring walks by the river after a business trip and naps in the tall grass. He thinks of his girlfriend and his teenage son. His neighbors across the river, the De Beers, visit for a few hours. Meanwhile, Jacobus meets with some men looking for work at the spare farmhouse. They don't have proper work papers, but he reassures them it will not be an issue. Jacobus is a crafty fellow. He is the one in charge when Mehring is away. As such, he walks a fine line between serving his employer and fellow employees.

Mehring visits the farmhouse and remembers visiting his girlfriend, Antonia. She is an activist and taunts him constantly about his corporate lifestyle. He finds her talk intriguing, even though she berates him constantly. He tells her about his son and ex-wife in the United States. Mehring wanders the 400-acre property and ends up at his favorite place, the third pasture by the river. He feels peaceful in the reeds and willows. There, he takes out a letter from his son Terry and reads it. He considers Terry spoiled and very self-indulgent. Mehring is upset and rips up the letter, although he later picks up the pieces.

The August winter is dry and cold. The wind whips through the camps near Mehring's farm and blows garbage across the roads. One cold night, some men come for Solomon at the camp and tell him that he needs to come with them to help his brother. He is reluctant but follows them out into the night anyway. The next morning, Jacobus finds Solomon naked and unconscious but still alive in the field. He takes him to the hospital and phones Mehring to tell him what happened. Mehring is concerned. Jacobus assumes that creditors beat Solomon because of his brother's money problems. Coincidentally, Solomon is found in the third field, where the dead man was buried.

A fire starts on the other side of the river, jumps across and severely burns a portion of Mehring's property. It stops far short of the cattle, but it devastates his favorite resting spot in the third pasture. Even the water reeds and willows are badly burnt. He walks in despair and realizes just how selfish Antonia is, just like his son. Still, Mehring feels bad about Terry and the fact that he hadn't been around much for his youth. He knows the scarred land will heal quickly, but he is upset nonetheless.

The "Indian" store, run by ymigrys from India, is set up like a prison, not to keep them in, but to keep the locals out. They have completely fenced in the property, even the roof. Dogs prowl the perimeter. Still, Bismillah, the middle-aged son, paces the area cautiously. He can't stop their greatest fear, that the government will evict them for good. They have lawyers hired to delay the process. His son Dawood works in the shop with him and his frail father, William. There is a day when a local man gets in a dispute about money and leaves in disgust. William, usually just a fixture on the wall, comes to life and argues excitedly with the man.

Mehring remembers a plane ride when he is forced to ride coach and sits next to a teenage girl. Her hand brushes his thigh, and he touches her in return. The girl shows no reaction. He continues touching her for hours, until the plane finally lands. Only then does the girl go screaming to her mother. Mehring is amazed at how little comes of that situation. The family doesn't have enough social status to do anything to him.

Winter ends, and Terry comes to visit. The workers prepare for a ceremonial dance while father and son walk the property. Mehring sees some of his son's activist literature and is disgusted. Still, he is wistful that Terry might some day take over the farm. He takes Terry to the airport and retires to the farm, listening to the beat of the drums. He is truly happy on his property.

The celebration lasts well into the night. Food quickly runs out, but there is plenty of beer. Solomon asks Jacobus if he died in the field, confused over the fact that Jacobus thought he was dead. Jacobus laughs off the question as ridiculous. Solomon relates being "dead" in the field with the other dead man buried there.

The fire revitalizes the pasture down by the river. Already, it is in full bloom, with more color than Mehring has ever seen. He thinks of Antonia and how little she understands him and life in general. He walks the river and feels good. Mehring even gives a ride to some strangers on the way to work. He meets a young girl at breakfast who is a friend of Terry's. He knows her family and is shocked at lunch to find out that her father has just committed suicide over a bad business deal. This makes Mehring reconsider his legacy again. Who will continue after he is gone? He can't bear to attend the funeral and sends flowers instead. He reluctantly stops by the Indians' store to get some Christmas presents for his staff. Mehring doesn't enjoy the experience because they fawn over him and make him very uncomfortable.

On Christmas day, the workers start celebrating early. Even Mehring has a bottle of whiskey and soon reminisces with Jacobus. They watch a heat storm come in and talk about the dead man. Mehring later walks by the river alone and gets his foot stuck in the deep mud. It is mired for some minutes before it finally comes loose. Mehring thinks that the dead man was grabbing at his foot.

One of the workers, Izak, stops by the Indians' store and finds one of the younger men painting a peace sign on the water tank. They chat, and Izak leaves. The boy's father is not pleased that the controversial symbol might draw unwanted attention to them. Meanwhile, Mehring calls to speak to his ex-wife in New York City, whom Terry is with. Mehring becomes furious when his ex-wife mentions that Terry is not coming back to South Africa. He was choosing to avoid Terry's mandatory military service, which would bar him from ever returning. Mehring is angry, not because of Terry's bad decision, but because Terry doesn't have the courage to tell him himself.

Suddenly, it starts to rain, and it doesn't stop for two weeks. It is the start of the wet season. A couple in town is killed by a flood, and Mehring is in a panic because the road to the farm is washed out. With the phone lines out of commission too, several days go by when Mehring has no news from the farm. When he finally does get through, he finds that Jacobus has done a fine job taking care of things in his absence.

Mehring picks up a young woman on the way to work who leads him to a remote area under a bridge. Mehring realizes too late that it is probably a trap. Two men come out at him as he lays with the woman. Mehring sprints to his car and leaves them all there, including the woman. He rebukes himself later, thinking that the woman might have been an innocent bystander.

Jacobus leads a procession for the dead man across the hilltop. They are reburying the unknown man, and many of the workers are present. The man is laid to rest. He is now part of them all, and at peace.

More summaries and resources for teaching or studying The Conservationist.

The Conservationist from BookRags. (c)2022 BookRags, Inc. All rights reserved.