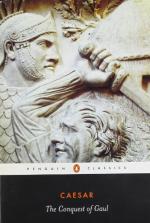 Julius Caesar
This Study Guide consists of approximately 16 pages of chapter summaries, quotes, character analysis, themes, and more - everything you need to sharpen your knowledge of The Conquest of Gaul.

The Conquest of Gaul Summary & Study Guide includes comprehensive information and analysis to help you understand the book. This study guide contains the following sections:

This detailed literature summary also contains Topics for Discussion on The Conquest of Gaul by Julius Caesar.

The Conquest of Gaul by Julius Caesar is the account, in eight books, of the campaigns conducted by Julius Caesar, Roman Consul, and governor of Transalpine Gaul, in the period from 58 BC to 51 BC. These campaigns were carried out by the Roman legions under his leadership to suppress the rebellions that arose among the Gallic tribes in the area of what is now France and Belgium. He also carried out two invasions of Britain, and the Roman army crossed the Rhine twice in an effort to blunt the pressure from German tribes, who constantly tried to invade Gaul to conquer the weaker Gallic tribes.

The eight years of warfare and battles are described in detail. They give a complete picture of how the Roman legions operate and how their different adversaries wage war against them. The reader, following the accounts of the different campaigns, journeys through the territories of the different peoples and tribes, which occupy greater Gaul in the century before Christ. The personalities of the different leaders and their public utterances, given when they challenge the invading Romans and when they sue for peace, are revealed in compelling portraits of the individual rulers of that time.

Campaigns range from the territories of the Helvetii next to the Jura mountains, to the Sequani in central Gaul, to the coastal tribes of the North Sea, to southern Britain, and to the unique coastal peoples, the Venetii, in what is now Brittany, who resist the Romans with their unique form of coastal warfare.

Caesar recounts how the legions, with their superior technology of siege works and entrenchments, are able to overcome even the best-defended strongholds of the Gauls. But even so, his accounts detail several major reversals of fortune for his armies when, for example, the 14th Legion under Sabinus is completely annihilated by the Eburones, and how it is only by forced marches and quick intervention by Caesar in person on the battlefield that the legions are saved from a similar fate when the Nervii mount their deadly attacks.

The imaginative duplicity of the Gauls is well described in their efforts to trick the Romans at various junctures, and the equally sophisticated ruses employed by the Roman generals to outwit the far more numerous enemy are all described in fascinating detail. In the end, the climax of all the rebellions comes at the siege and capture of Vercingetorix's stronghold of Alesia, when the besieging Roman army is, itself, surrounded by the forces of Commius. The graphic detailed accounts of the ensuing struggle and final victory of Caesar and his troops must remain one of the great classics of history of warfare.

Though there are elements of propaganda and self-justification in Caesar's accounts, which are intended to be read by the Senate and citizens of Rome, these books occupy a unique and irreplaceable place in the history of the Western world.

More summaries and resources for teaching or studying The Conquest of Gaul.

The Conquest of Gaul from BookRags. (c)2022 BookRags, Inc. All rights reserved.