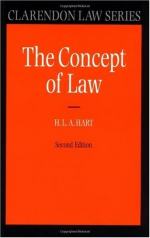 H. L. A. Hart
This Study Guide consists of approximately 30 pages of chapter summaries, quotes, character analysis, themes, and more - everything you need to sharpen your knowledge of The Concept of Law.

The Concept of Law Summary & Study Guide includes comprehensive information and analysis to help you understand the book. This study guide contains the following sections:

This detailed literature summary also contains Topics for Discussion and a Free Quiz on The Concept of Law by H. L. A. Hart.

The Concept of Law focuses on what law is and the difficulties defining it. In pursuing clarity about the concept of law, Hart addresses many issues, including the connection between law, coercion, morality and judicial decision-making. Hart's first important contribution to philosophy of law in the book is his criticism of John Austin's view that law is a command backed up by coercive force. Law is both more and law than this. Hart's set up of the major problems and his critique of Austin comprise the first four chapters.

Hart resists reducing the concept of law to one definition; instead, he distinguishes between two concepts of law: primary rules and second rules. Primary rules are rules of proper behavior that specify what actions are required by the law. Secondary rules confer powers to create, interpret and adjudicate primary rules. Developing secondary rules is an enormous social achievement that makes human civilization possible. Secondary rules help to clarify what primary rules mean but no rule can make language determinate enough to eliminate the need for interpretation. Instead, political and legal officials must use discretion to make determinate what would otherwise not be. These matters are taken up in chapter five.

In chapter six, Hart discusses how a legal system may be evaluated from both an 'external' point of view that describes what a society's laws are and the 'internal' point of view of those who accept the rules as standards. Both points of view are required to define a legal system. Legal systems require an ultimate rule of recognition which structures all the other primary and secondary rules. Private citizens must generally obey primary rules and public officials must accept secondary rules for these rules to exist.

In chapter seven, Hart rejects formalism and rule-skepticism as unnecessary extremes for making sense of legal systems; formalism treats all laws and rules as determinate, whereas rule-skepticism recognizes indeterminacy but does away with rules as a result. Hart thinks there is a middle ground.

In chapters eight and nine, Hart analyzes the relationship between justice, obligation and morality. He also denies that law and morality have any necessary connection; they also have important differences, such as that morality cannot be changed at will. Some justifications of laws may be largely independent of morality. Hart then contrasts legal positivism, the view that law and morality have no necessary connection, with natural law theory, which holds that legitimate laws are rooted in morality. Hart is a 'soft positivist' because he thinks that rules of recognition may include moral rules.

In chapter nine, Hart finds international law problematic because it often lacks secondary rules. In the postscript, Hart addresses a number of criticisms of his view advanced by legal theorist Ronald Dworkin.

More summaries and resources for teaching or studying The Concept of Law.

The Concept of Law from BookRags. (c)2022 BookRags, Inc. All rights reserved.