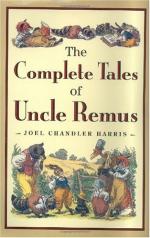 The Complete Tales of Uncle Remus Topics for Discussion

Joel Chandler Harris
This Study Guide consists of approximately 44 pages of chapter summaries, quotes, character analysis, themes, and more - everything you need to sharpen your knowledge of The Complete Tales of Uncle Remus.

Why was story telling such a popular thing on plantations? Who, besides Uncle Remus, tells stories?

Some of the stories explain facts of life, such as why animals are how they are. List three of these. Are they acceptable folklore explanations? Why or why not?

Compare the rabbits in the stories to people. What are the similarities? The differences? What particular difference bothers the second little boy?

Who was Miss Sally? Describe her relationship with Uncle Remus. Do you believe this to be typical? Believable? Why or...

More summaries and resources for teaching or studying The Complete Tales of Uncle Remus.