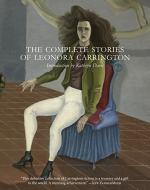 Plot Summary
+Chapters Summary and Analysis
"The Debutante," "The Oval Lady," "The Royal Summons," "A Man in Love," "Uncle Sam Carrington"
"The House of Fear," "As They Rode Along the Edge," "Pigeon, Fly!" "The Three Hunters," "Monsieur Cyril de Guindre"
"The Sisters," "Cast Down by Sadness," "White Rabbits," "Waiting," "The Seventh Horse."
"The Neutral Man," "A Mexican Fairytale," "Et in bellicus lunarum medicalis," "My Flannel Knickers," "The Happy Corpse Story"
"How to Start a Pharmaceutical Company," "My Mother is a Cow," "The Sand Camel," "Mr. Gregory's Fly," "Jemima and the Wolf"
Free Quiz
Characters
Symbols and Symbolism
Settings
Themes and Motifs
Styles
Quotes
Order our The Complete Stories of Leonora Carrington Study Guide

Leonora Carrington
This Study Guide consists of approximately 44 pages of chapter summaries, quotes, character analysis, themes, and more - everything you need to sharpen your knowledge of The Complete Stories of Leonora Carrington.

The following version of this book was used: Carrington, Leonora. The Complete Stories of Leonora Carrington. Dorothy Press, 2017. Print

The collection begins with the short story, "The Debutante." In this story, the narrator’s mother threw a ball in her honor. But the girl did not want to go to the ball. So she asked her best friend, a hyena, to take her place. In order to pull off the switch, the girl and the hyena murdered the maid and used her face as a mask. In “The Oval Lady," the narrator snuck into a strange house in order to learn about the ten-foot-tall 16-year-old girl who lived there. The girl had a magical playroom that her father had banned her from using. The girl defied his orders and took the narrator into her playroom, but the father found out and burnt her favorite toy. In "The Royal Summons," the narrator was invited to the palace when the queen went mad, in order to take her place. The situation got awkward when the narrator was asked to assassinate the queen. The narrator tried to leave, but was forced to go through with the murder. In “A Man in Love," the narrator tried to steal a melon, but was caught by the grocer. He took her upstairs to his apartment where his wife had been lying in a sleeping curse for decades. He told her the story of their brief marriage, and then the narrator ran away. In "Uncle Sam Carrington," the narrator went into the woods to seek the aid of two wise women who made potions in order to find a solution to her mother’s social problem. She found a talking horse who led her to the women and showed her how they chopped up anthropomorphized vegetables to make their potions.

In "The House of Fear," the narrator met a talking horse who invited her to a party at a castle. The narrator accompanied him and went to the castle, where Fear made everyone play a strange and ominous game. In "As They Rode Along the Edge," Virginia Fur, a cat-woman, lived in the woods with the animals and fell in love with a boar. Saint Alexander tried to convert her to Christianity, but then got the boar killed by some hunters in exchange for money, and Virginia Fur extracted revenge on Saint Alexander. In "Pigeon, Fly!" the narrator was asked to come and paint a portrait of a man’s deceased wife. The narrator found the woman’s diary, and then discovered that she was magically taking her place. In "The Three Hunters," the narrator was resting in the woods when she met a strange man who asked her back to his house, where he told her about the curse placed on his family. In "Monsieur Cyril de Guindre," the title character discovered that the daughter he had abandoned to a nunnery years ago was living in his garden with a devious Abbot.

In "The Sisters," Drusille received a letter from her lover, an ex-king, who was coming to visit her. She kept her sister, a strange bird-vampire creature, locked up in the attic, but she was so distracted by her lover’s visit that she forgot to lock the door, and her sister got out and killed the maid. In "Cast Down by Sadness," the narrator happened upon an old woman who invited her in for dinner. As the night progressed, the narrator discovered that the woman and her son had been dead a long time. In "White Rabbits," the narrator became obsessed with her neighbors, who turn out to be lepers who live with carnivorous rabbits that they occasionally eat. When they invited her to stay and become like them, the narrator ran away. In "Waiting," Margaret stood frozen on the street waiting for her lover until an old woman found her and took her back to her house, where they spoke about love. In "The Seventh Horse," a horse-woman named Helavino got trapped in a briar patch. Then she saved a sweet and gentle man named Phillip from his evil wife, Mildred.

In "The Neutral Man," the narrator was invited to a strange party. While there, she learned that one of the guests might have been a vampire that needed to be killed, but she refused to do it. In "A Mexican Fairytale," two tales collided when Juan and Maria met. Juan was a pig-herder that borrowed a ladder from Don Pedro in order to save a magical bird. Maria was Don Pedro’s daughter who ran away when he got angry about his missing ladder. Maria and Juan met and fell in love, before entering the earth and merging into one being. In "Et in bellicus lunarum medicalis," rats who perform surgeries were donated to Mexico, but neither the doctors nor the psychologists wanted to use rats in their practices. After a failed kidnapping attempt, the rats were used as plumbers. In "My Flannel Knickers," the narrator lived on a traffic island alone after getting out of jail. She willingly went to jail after becoming infamous for having magical powers that everyone wanted a piece of. In "The Happy Corpse Story," the narrator was looking for his lost lover when he discovered a Happy Corpse that agreed to help him. As they rode together towards Hell, the corpse revealed that she was his mother.

In "How to Start a Pharmaceutical Company," the narrator lived in a future world in which electronics had been banned. She received the corpse of Joseph Stalin as a gift and used his body to start a pharmaceutical company. In "My Mother is a Cow," the narrator was a prisoner of a group called The Watchers. She worshipped a strange Goddess that talked to her about the meaning of life and humanity. In "The Sand Camel," two boys went out into the woods and created a camel out of sand. The camel came to life and took their grandmother away. In "Mr. Gregory's Fly," the title character had a fly that always flew in and out of his mouth. He asked a local wise woman for help, but tried to swindle her out of a price, and so ended up with a potion that made his situation worse. In "Jemima and the Wolf," Jemima met a man who reminded her of a wolf and ran off into the woods looking for him. She found his son, who led her to his castle, where she discovered that the family had been dead for quite some time.

More summaries and resources for teaching or studying The Complete Stories of Leonora Carrington.