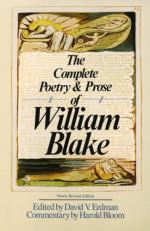 The Complete Poetry and Prose of William Blake Characters

William Blake
This Study Guide consists of approximately 37 pages of chapter summaries, quotes, character analysis, themes, and more - everything you need to sharpen your knowledge of The Complete Poetry and Prose of William Blake.

The Complete Poetry and Prose of William Blake Summary & Study Guide includes comprehensive information and analysis to help you understand the book. This study guide contains the following sections:

This detailed literature summary also contains Topics for Discussion and a Free Quiz on The Complete Poetry and Prose of William Blake by William Blake.

Urizenappears in The Book of Urizen & Elsewhere

This is a fictional character. He is an extremely powerful evil entity who has more than one creative piece devoted to him by William Blake. His role is somewhat variable. He is referred to as a devil, as a denizen of the deep. He is also called an Orc in later parts of the book. The entity is spiritual in nature, but evil. He functions as a leader. He is associated with rage, and darkness and fire. William Blake also uses him to indicate the direction of North.

This character occurs in many locations throughout the book. He is associated with Los, who is also fictional. He, like Los, is also both intimately connected with real places and events.

Little Boyappears in Songs of Innocence, and elsewhere

This is simply a child. He occurs as the subject of 4 poems. There are actually 6 poems that have a little boy as their subject, one of the poems is dedicated to a little black boy, the rest do not indicate the child's race.

This boy, like many others, is functioning as the universal. As a particular individual child, he is fictional , but resembles and intimates many actual boys.

Rintrahappears in Milton, the First Book

The author explicitly states during this text that Rintrah is a reprobate. This is one of his three classes of men. This is one of the two kinds which are destined to permanent destruction rather than resurrection.

There is a Great Assembly during this book that includes Rintrah. This character occurs in a few of the other pieces as well.

Palamabronappears in Milton and others

Palamabron is another of the major fiction characters within the complete body of William Blake's writings.

This character is supplanted by Satan. The devil repeatedly endeavors to take over Palamabron's duties. This is granted to Satan, but there are some strange consequences, one of which is that the horses and the servants react very differently to Satan than they did to Palamabron.

This leads to a trial. Palamabron is blamed, and after only 1000 years he relents in his post and allows himself to be replaced.

Satanappears in Throughout but not Everywhere

Satan is called by Blake in the Milton writings as being of the Elect class, which is one of the three classes of mankind: the elect, the reprobate and the redeemed.

The author cries out Satan's name or has his narrative voice do so repeatedly. In addition to a mild mannered exterior, Satan is also described as having a deep rage. He is a powerful spiritual entity and tormentor. He is some times set against Christ, at other times he is a part of the story of Urizen and Los.

God is referred to many times in these writings. He is referred to both in general, and in the form of Jesus the Christ. He is recognized as the most powerful entity in the universe and the ultimate source and controller of everything.

God can also be perceived, according to Blake, in people as the Poetic Genius. In this case, he is seen to be behind everything, especially everything good.

God manifests in mankind in forms that humans can recognize and understand. Blake is clear about certain characteristics about God, but in some attributes is not so definite. Jesus the Christ is an undisputed form of God.

The Truth, and the Imagination and the Poetic Genius and the Spirit are all, like Jesus the Christ, ways in which God can be perceived. God is also the Infinite that can be perceived in the finite by the mind of man when that mind is properly used.

Angels, as God's loyal non-human servants are also referred to within the creative works of this author.

Thelappears in Book of Thel

This character has an entire book devoted to her. She is a youngest daughter, who seeks serenity. During much of the poem she is alone with nature. She is described as pale, and delicate.

King of Englandappears in Prophecy for America

This figure is mentioned only briefly. He appears in the Prophecy for America. "The King of England looking Westward trembles at the vision," (p. 53).

This is a man who is tormented by the Devil because of love for another. He appears in a poem entitled Long John Brown & Little Mary Bell within the Songs & Ballads section.

Little is said of him, other than that he was overthrown by the devil over a love difficulty. The only, or main visible symptom was that he had an extremely fast metabolism and a voracious appetite. So he ate and drank to excess but withered away nonetheless. His problem was not caused by himself nor by Mary but by the manipulations of a fairy and the devil's own opportunism.

Fairyappears in Songs & Ballads and elsewhere

There are actually a number of fairies in the Complete Poetry & Prose of William Blake. They occur as references with some confusion. Are they figments of the imagination, the very imagination that Blake as argued is the truth? Are they real? The trouble is much the same as it is with old gods or with Blake's own fictive characters.

Little Mary Bell has a fairy.

This is a man whose romantic desires are closely associated with faeries. There is a direct conflict in his case between angels of providence and his faeries. It is as though his various attractions to females are the very stuff that creates or attracts the faery folk. Angels drive away his fairies.

He chooses one woman to be his wife, but there is another disappointed woman.

Mary of the William Bond poemappears in Songs & Ballads

Mary is a human woman. She could be interpreted as being Mary Bell at a more mature stage of life. She is hoping to be able to marry William Bond. As it happens in the poem named after him, this does not occur, largely because of how he loves another woman.

More summaries and resources for teaching or studying The Complete Poetry and Prose of William Blake.

The Complete Poetry and Prose of William Blake from BookRags. (c)2022 BookRags, Inc. All rights reserved.