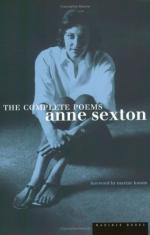 The vast majority of Sexton's poems are written in first person, as she was usually attempting to give the reader direct access to her state of mind when each poem was written. The notable exception to this is in the book of fairy tale adaptations, Transformations, in which Sexton adopts a standard third person narrative method, as one would find in the original stories. There are other instances when the author deviates from first person, such as in "Doors, Doors, Doors", "The Jesus Papers", and "The House", but generally speaking, Sexton's speaker is merely thinly veiled version of herself.

The setting of The Complete Poems might best be described as the speaker's mind. Sexton puts a high value on imagery and description, but these are usually employed to evoke a feeling rather than to describe a physical place. Sexton lived in Boston for the entirety...