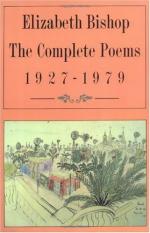 Elizabeth Bishop
This Study Guide consists of approximately 29 pages of chapter summaries, quotes, character analysis, themes, and more - everything you need to sharpen your knowledge of The Complete Poems, 1927-1979.

New York City is the cultural and fashion capital of the United States and the heart of many literary revolutions. Home to some of the world's most prestigious and successful publishing companies, it stands to reason that many writers would flock to the city. New York became highly prominent in the 1920s with the birth of the Algonquin Table and influences of notable luminaries like Dorothy Parker. Marianne Moore also emerged around this time. Elizabeth Bishop also lived in New York City.

Marianne Moore came into notoriety after she took a position at the New York City Library and became acquainted with well known writers such as Ezra Pound and William Carlos Williams. The tradition continued from Harlem to Greenwich Village to SoHo, giving birth to the careers of notables Allen Ginsberg and Jack Kerouac.

New York remains a center of literary excellence and continues...

More summaries and resources for teaching or studying The Complete Poems, 1927-1979.