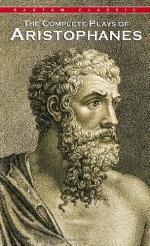 Aristophanes
This Study Guide consists of approximately 36 pages of chapter summaries, quotes, character analysis, themes, and more - everything you need to sharpen your knowledge of The Complete Plays.

This detailed literature summary also contains Topics for Discussion and a Free Quiz on The Complete Plays by Aristophanes.

Aristophanes was the greatest writer of comedy in the ancient Greek world. This collection contains 10 of his surviving plays. Most are in the form of what is called Old Comedy. Old Comedy is typically satirical, attacking politicians and issues of the day. Many of these plays deal with issues in Athens at the time of the plays.

The first play in this collection deals with several of the themes that will recur in later plays, namely the issues of war and peace and satire of democracy and Cleon. In this play, Acharnians, a lone man attempts to make a private peace with the Spartans in opposition to his countrymen. In Knights, Aristophanes intensifies his attacks on Cleon by pitting a lowly sausage maker against a thinly disguised version of Cleon for control of Athenian politics. Both men compete in seeing who can be the most corrupt and vile in bribing the population of Athens. In Clouds, Aristophanes sets his sites on Athens' most famous gadfly, Socrates. In an attempt to get out of gambling debts an old man sends his son to Socrates' school so he can learn the rhetorical arts of turning bad arguments into good. The skill is more dangerous than the old man would have guessed though and the play ends with him trying to burn down the philosopher's "think-shop". Wasps take aim again at Cleon and the litigious nature of Athenian society. A son is worried about his father, who is addicted to serving on juries and judging lawsuits. It is only by staging a mock trial himself that he is able to get his father to give up on his court addiction.

In Peace and Birds Aristophanes leaves the topical behind and engages in comedic flights of fancy and fantasy. Peace is the story of a country gentleman riding a dung beetle into heaven to try to free the goddess peace and end the destructive war between Athens and Sparta. Birds is the story of two men who are tired of living among men and attempt to join a society of birds. In so doing, they organize a bird revolution against the gods and men.

Lysistrata is the tale of Greek women deciding to refuse sex with their men until they agree to stop fighting and sign a peace between Sparta and Athens. This obscene and hilarious play is the beginning of several plays about women. In Thesmophoriazusae, a group of women have formed a council to try and sentence the playwright Euripides in absentia for his slanders against them in his plays. Euripides sends his cousin to infiltrate the women but he is discovered and Euripides has to find a way to say his friend. Frogs is a critical comedy that tells the story of Dionysus and servant descending into Hades to bring back Euripides from the dead but deciding, once they get there, that they would rather save Aeschylus. In the Assemblywomen, a group of women hatch a plot to take over the government and institute a communist system. Finally, Plutus is the story of what would happen if wealth went to those who deserved it rather than those who are lucky.

More summaries and resources for teaching or studying The Complete Plays.