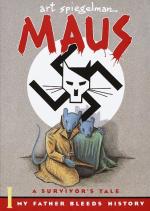 Art Spiegelman
This Study Guide consists of approximately 46 pages of chapter summaries, quotes, character analysis, themes, and more - everything you need to sharpen your knowledge of The Complete Maus.

This detailed literature summary also contains Topics for Discussion and a Free Quiz on The Complete Maus by Art Spiegelman.

Artie Spiegelman, the author, artist, and principle narrator, uses the medium of a graphic text—a comic book—to relate the biographical memoir of Vladek and Anja Spiegelman, his parents. The Spiegelmans are Jews, originally from Poland, who survived the Nazi Holocaust and internment at Auschwitz, Auschwitz-Birkenua, Gross-Rosen, Dachau, Ravensbrück, and other concentration camps. After the war the Spiegelmans lived briefly in Stockholm before emigrating to the United States of America and settling in Rego Park, New York. The graphic text uses the extended allegory of anthropomorphized mice—Maus in German—to represent Jews, cats to represent Germans, and other suitable animals to represent other nationalities or ethnicities.

Vladek Spiegelman, born 1906, meets Anja Zylberberg, born 1912, in the town of Sosnowiec, Poland. They court and wed in 1937 and live in various small Polish towns in the Sosnowiec area—close to the German-Poland-Czechoslovakia border, between Krakow, Poland and Breslau, Germany. Their first son, Richieu, is born in 1937 as Vladek becomes commercially successful establishing a textile factory which is initially largely funded by Anja's affluent father.

After the birth of Richieu Anja suffers a nervous collapse, c. 1938. Leaving the textile factory in the custody of his father in law, Vladek takes Anja to a sanatorium in Czechoslovakia where the couple stays for several weeks until Anja recovers her health. While traveling through Czechoslovakia, Vladek and Anja are alarmed at the popularity of militant Nazism and blatant anti-Semitism. They return to the Sosnowiec area briefly and then move to Bielsko, Poland, where Vladek continues to prosper in the textile business.

Then, in 1939, Vladek is drafted. Anja returns home to Sosnowiec while Vladek participates in a single border skirmish where he kills a Nazi invader and is then captured with thousands of other Polish soldiers. Vladek spends several weeks as a prisoner of war in difficult circumstances performing brutal manual labor for the Nazis. He is then discharged back to Poland and makes his way to Sosnowiec where he lives with the Zylberberg family.

Over the next months the Nazi Holocaust begins to unfold and the Zylberbergs are moved into various ghettos and the family begins to splinter as the Nazis begin pogroms and deportations. Richieu is sent to what is perceived as a place of safety only to die within a few weeks. Vladek and Anja subsequently attempt to flee to Hungary but are handed over to the Nazis by double-crossing smugglers. The Spiegelmans are then sent to Auschwitz where they are segregated and put at hard labor. Through a detailed series of horrific experiences, Vladek and Anja manage to survive the Holocaust and a series of deportations and mass executions and eventually are liberated by the advancing allied armies. They once again meet in Sosnowiec where their few remaining friends and relatives also gather. The Spiegelmans emigrate to Sweden and live in Stockholm where, in 1948, their second son Artie is born. Soon they emigrate to the United States of America and settle in Rego Park, New York.

After about two decades the prolonged trauma of the Holocaust finally overwhelms Anja and she takes her own life. After some time, Vladek marries Mala—another Jewish Holocaust survivor—although their relationship is contentious. Artie is distant from his father but desires to create a biographical memoir and therefore conducts a series of tape-recorded interviews with Vladek which eventually result in the production of the graphic text.

More summaries and resources for teaching or studying The Complete Maus.