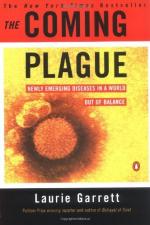 The Coming Plague: Newly Emerging Diseases in a World Out of Balance Quotes

Laurie Garrett
This Study Guide consists of approximately 31 pages of chapter summaries, quotes, character analysis, themes, and more - everything you need to sharpen your knowledge of The Coming Plague.

"At a time when mothers of the world's wealthiest nations arranged to have their children 'immunized' by deliberately exposing the youngsters to measles, mumps, even chicken pox, these diseases were forcing parents in some of the world's poorest nations to find ways to cope with the expected deaths of more than half their children before the age of ten."
Introduction, pg. 8

"Every problem seemed conquerable in the decade following World War II; humanity could reach the moon, bombs too terrifying to ever be used could create a balance of terror that would prevent all further worldwide wars. American and European agriculturalists could 'green' the poor nations of the world and eliminate starvation, civil rights legislation could erase the scars of slavery and bring racial justice, democracy could shine in startling contrast to communism and produce a beacon to which the nations of the world would quickly flock..."
Chapter...

More summaries and resources for teaching or studying The Coming Plague: Newly Emerging Diseases in a World Out of Balance.

The Coming Plague: Newly Emerging Diseases in a World Out of Balance from BookRags. (c)2022 BookRags, Inc. All rights reserved.