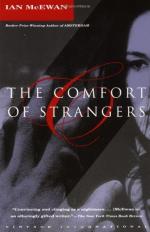 The Comfort of Strangers Summary & Study Guide includes comprehensive information and analysis to help you understand the book. This study guide contains the following sections:

This detailed literature summary also contains Topics for Discussion and a Free Quiz on The Comfort of Strangers by Ian McEwan.

The Comfort of Strangers is the story of Mary and Colin, an English couple in Venice who, during a monotonous visit to Venice, meet Robert and Caroline, who offer their hospitality. Robert's brutal machismo, as well as Caroline's submission and her severe injuries always color this hospitality with uneasiness. Caroline and Robert's final bizarre act is to drug Mary and give Colin the choice to allow Robert to do anything to him and save Mary's life or let her die. Colin chooses to save Mary, and, when she awakes, he is dead.

Set in a city resembling present-day Venice, a middle-aged English couple spends a dull, repetitive holiday. Mary and Colin have been together for seven years and their relationship, like their vacation, has lost all interest and excitement. All that is to change, however, when, during a nighttime walk, the couple becomes lost. Wandering a deserted street, a seemingly friendly man named Robert appears almost out of nowhere and leads the pair to his bar for wine and conversation. The abruptness of his appearance foreshadows the malice of his intentions. He does not meet Colin and Mary by accident. Robert tells unending stories of his wealthy childhood, concentrating on flashbacks of the vicious discipline often meted out to him and to his sisters by their father. The theme of violence will return again and again as Robert visits on Colin and particularly on his wife. The bar closes and Colin and Mary are forced to spend the rest of the night sleeping in a doorway.

The next morning, as the couple is deciding how to get back to their hotel from so far across the city, they see Robert enter the square. Neither wishes to speak with him again after the strange and rather eerie encounter of the night before, but he walks cheerfully to their side. Seeing their bedraggled condition, he reproaches himself for keeping them up all night in his bar and insists that they visit his house for some rest and hospitality. Neither is willing and tries to say so in polite terms, but, with a combination of apparent friendliness and unmistakable force, he sweeps them into a cab.

Mary awakes first and examines their little room. When Colin wakes shortly after her, they wonder - Colin with some nervousness, Mary with blithe disregard, where their hosts might be. As they are naked and the only piece of clothing in the room is an embroidered dressing gown, Mary dons this and goes in search of information. After passing through a long gallery filled with remembrances of Robert's father, Mary finds Caroline, Robert's disabled wife. Mary and Colin stay to dine with Robert and Caroline, but there is a strange detail that casts a shadow over the evening. While showing him some of his father's most prized possessions, Robert inexplicably punches Colin in the stomach. Colin reveals this to no one at first and, when asked by Caroline to promise to come back, does, indeed, promise.

After that night, however, Colin and Mary's holiday seems to take a turn for the better. They spend days in their hotel room making love - after an acknowledged sexual draught between them - and they discover an affection between themselves they thought they had lost years ago. Accidentally arriving in front of Robert and Caroline's home one afternoon, their peace is shattered. Against their instincts, they respond to the couple's invitation for another visit. After separating the couple - Robert taking Colin to the bar and Caroline making tea for Mary - Robert and Caroline put their grisly plan into effect. Caroline drugs Mary so that Robert must decide between doing anything Robert asks and watching Mary die. With that, Robert slits Colin's wrist. When Mary wakes, he is lying dead at her feet.

As overwrought as the story is emotionally, structurally it is fairly simple. It proceeds in a linear fashion with a few flashbacks here and there and ends, resoundingly, with a death - making it, in the strictest sense, a tragedy.