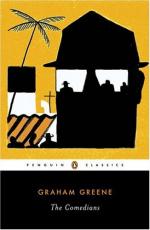 The Comedians Summary & Study Guide includes comprehensive information and analysis to help you understand the book. This study guide contains the following sections:

This detailed literature summary also contains Topics for Discussion and a Free Quiz on The Comedians by Graham Greene.

The Medea, a Dutch ship traveling from the US to Port-au-Prince carries Mr.. Brown, Mr.. and Mr.s. Smith, and Major Jones among its passengers. They entertain themselves in various ways, mostly discussing their experiences. Mr.. Smith is a presidential candidate in the US 1948 elections. He wants to establish a vegetarian center in Port-au-Prince. Mr.. Brown returns from the US, where he unsuccessfully tried to sell his hotel in Haiti losing money due to the violent regime sparking fear in everyone, including tourists. Major Jones is on a secret business mission.

Mr.. Brown, the narrator, was born in Monte Carlo. His mother's last name was the Comtesse de Lascot-Villiers. She fled Monte Carlo when he was at the Society of Jesus Catholic school. He was expelled for putting during the mess a token into the collection bag instead of a coin. After leaving school he went to England and obtained work as a waiter. He kept working obtaining subsequent positions with mostly forged references until he received a postcard from Port-au-Prince in Haiti from his mother, who was inviting him to see her. Soon after his arrival she died leaving him Trianon Hotel. He immediately decided to make the hotel the most successful hotel in Port-au-Prince, although he managed to achieve that only for a short time.

The Captain receives various cable inquiries about Major Jones, who is arrested upon arrival in Haiti. When Mr.. Brown reaches his hotel he finds the Minister for Social Welfare, Mr.. Philipot dead near his swimming pool. The Minister chased away other guests that stayed in the hotel and then committed suicide. Mr.. and Mr.s. Smith arrive at the Trianon Hotel just when Mr.. Brown examines the dead body next to the pool. He manages to distract them from seeing the corpse, hiding it also from his lover, Martha, who follows Mr.. and Mr.s. Smith to the hotel. She is the wife of the South American ambassador, Mr.. Pineda.

When Mr.. Brown's friend, Doctor Magiot, arrives they dispose Philipot's body outside the city near the road. The next day Mr.. Smith inquires about Mr.. Jones's disappearance. They all go to the Secretary of State to find out about his whereabouts, but their intervention is unsuccessful. Finally they discover that Mr.. Jones is detained by the police. When they visit him he reveals that he got into trouble because of the wrong name on his letter of introduction he had with him. With their help he rectifies his mistake, giving them another letter of introduction to pass to the secret police the Tonton Macoute. They don't hear of him for a while. The next time Mr.. Brown's encounters with Mr.. Jones is in a brothel. Mr. Jones is seeing Mr. Brown's favorite prostitute while Captain Concasseur waits outside.

During Mr. Philipot's funeral, his coffin with his body is stolen. Mr. Smith who witnessed the incident with his wife and Mr. Brown inquire about it, discussing it with the Minister. He is offered a site for a vegetarian centre in exchange for bribes. Henri Philipot wants to take revenge for his uncle's death and starts looking for an arm supply. Mr. Brown directs him to see Mr. Jones. Following an attack on the police station Mr. Brown is interrogated at his hotel. Mr.s Smith, who intervenes on Mr. Brown's behalf, rescues him from being killed by the police.

Mr. Smith finally gives up on his mission and decides to leave Haiti. Mr. Brown receives an offer from Mr. Jones to become his partner in a deal with the government, but refuses to reveal its details until he receives Mr. Brown's agreement to join him. Mr. Brown, however, is reluctant to join him due to his suspicions about him.

Mr. Jones turns up at Mr. Brown's hotel in the middle of the night, as his deal fails. They seek help on the Medea that has just arrived in the port, but the police turns up during their meeting with the Captain. In the end, the Captain refuses to help them although he keeps his dealings with them secret from the police.

Mr. Brown takes Mr. Jones to the only place where Mr. Jones can find refuge: the South American embassy. Mr. and Mr.s Pineda accept Mr. Jones and they soon become friends. Their friendship evokes jealousy in Mr. Brown. He is envious of his lover spending time with Mr. Jones, who may stay there indefinitely. The government decides to replace Mr. Pineda upon finding out that Mr. Jones is hiding in his embassy. Before the replacement of Mr. Pineda is executed Mr. Brown arranges to get Mr. Jones away from the embassy by taking him to the rebels in the mountains led by Henri Philipot, who needs someone with an army experience. Although at the last minute Mr. Jones confesses that he has no such experience it is too late to go back and he proceeds with the plan to join the rebels. They travel to the place of meeting but they are late for the meeting with Henri Philipot and Joseph. The police find them the next day and are about to take them back to Port-au-Prince when Philipot and Joseph turn up killing the policemen. Both, Mr. Brown and Mr. Jones have to flee to the mountains. Mr.. Brown crosses the Dominican border while Mr.. Jones stays with the rebels, eventually getting killed during the clash with the Haitian army.

The Comedians from BookRags. (c)2022 BookRags, Inc. All rights reserved.