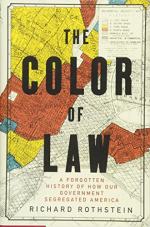 The Color of Law: A Forgotten History of How Our Government Segregated America Setting & Symbolism

The U.S. Constitution was ratified in 1788, and is the primary document for the creation, structure, and policy of the U.S. federal government and legal system. The Constitution, and notably the Thirteenth, Fourteenth, and Fifteenth Amendments are essential to Rothstein's argument about de jure residential racial segregation, because the varied interpretations of these amendments both empowered and stopped residential racial segregation in the United States.