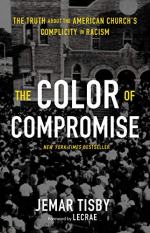 Jemar Tisby
This Study Guide consists of approximately 38 pages of chapter summaries, quotes, character analysis, themes, and more - everything you need to sharpen your knowledge of The Color of Compromise.

In Chapter 7, "Remembering the Complicity in the North," Tisby considers the racial dynamics in urban Midwestern, western, and northeastern regions. He shifts his focus from the Protestant church onto the Catholics and Pentecostals. Augustus Tolton, an emancipated Catholic, met discrimination in schools and parishes in the Midwest. Pentecostal preacher William J. Seymour met criticism for holding integrated gatherings.

At the start of World War I, hundreds of thousands of blacks joined the effort. Upon returning from war, however, blacks realized their participation had not earned them improved civil rights. Frustrations with the lack of reform led to the Red Summer of 1919, during which 25 U.S. cities engaged in volatile racial conflict. The Great Migration followed: mass numbers of...