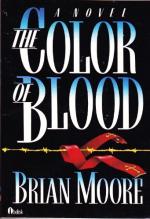 The Color of Blood Summary & Study Guide includes comprehensive information and analysis to help you understand the book. This study guide contains the following sections:

This detailed literature summary also contains Topics for Discussion and a Free Quiz on The Color of Blood by Brian Moore (novelist).

The Color of Blood is a novel about the religious leader of a former Soviet Bloc country, Cardinal Stephen Bem, who is struggling to walk the line between faith and government, and spirituality and safety. Some of his own bishops and trusted advisors feel that he is too loyal to the oppressive government, and have plotted to kidnap him and use an upcoming religious celebration to call the people to revolt against the state. Cardinal Bem is able to uncover the plans, expose the bishops, and prevent the planned revolt, but a fanatic Catholic assassinates him just moments after he saves the day. The book is an exploration of the themes of power, faith, trust, and loyalty.

In an unnamed former Soviet republic, Cardinal Stephen Bem is the religious leader of population that is split between loyalty to the party and loyalty to the church, with each side looking with suspicion and hostility at the other. The all-powerful government has spies and listening devices everywhere, and Cardinal Bem walks a fine line between doing what he believes is right in God's eyes and what will keep the church safe from the scrutiny and interference of the government.

At the opening of the book, Cardinal Bem is accosted by two assassins while being driven home from a meeting, and barely escapes with his life. A few hours later, he is taken prisoner by radical Catholics disguised as Security Police. These events take place only a few days before an important and emotional religious holiday, the celebration of the Martyrs of Rywald.

Escaping his captors, Cardinal Bem discovers that his own bishops have been plotting against him in order to turn the celebrations at Rywald into a call for rebellion against the government. Fearing for his own safety and for the bloodshed that would be caused by such an attempted rebellion, Cardinal Bem suddenly finds himself on the run and able to trust almost no one. Hiding from the government and his own bishops, he makes his way across the country incognito, trying to uncover details of the plan and discover what he can do to stop it.

Cardinal Bem is ultimately captured by the police and brought before the Prime Minister, an old Jesuit School classmate. The Prime Minister gives the cardinal one last chance to stop the plans and prevent the riots, or to suffer the implementation of martial law and civil bloodshed the likes of which have not been seen before.

Protected by the Security Police, Cardinal Bem confronts the treacherous bishops, foils a second attempt to kidnap him, and delivers an address to the Catholic faithful asking for peace and patience. As he begins to give communion, a member of a fringe group of Catholic terrorists takes matters into her own hands and shoots Bem in front of the gathered crowd.