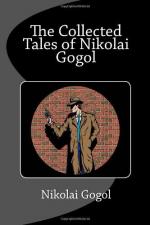 Nikolai Gogol
This Study Guide consists of approximately 33 pages of chapter summaries, quotes, character analysis, themes, and more - everything you need to sharpen your knowledge of The Collected Tales of Nikolai Gogol.

This detailed literature summary also contains Topics for Discussion and a Free Quiz on The Collected Tales of Nikolai Gogol by Nikolai Gogol.

Pyotr Kinless is also called by the name of "Petrus." His last name Kinless refers to his lack of relatives, or kin. Petrus falls in love with the beautiful Pidorka. She wants to marry him but he is poor and has no gold so her father will not allow the marriage. Pidorka's father tries to beat him but her little brother, Ivas, is able to hold his father back. In a tavern, he meets up with a man named Basavruik who actually turns out to be the Devil. Petrus is so desperate to marry Pidorka that he makes a deal with the Devil.

Basavruik leads Petrus to an enchanted forest where he finds gold. A witch will not allow him to take the gold until he provides human blood. The witch provides him with a small child to slay. The child is Pidorka's little brother, Ivas. Petrus beheads the child after which he falls into a deep sleep. When he awakes, there is gold next to him but does not remember how he obtained it and has no recollection of murdering Ivas. Petrus and Pidorka marry. Although Petrus cannot consciously remember what happened, his soul is tortured and he goes mad. The Devil, in the form of the witch, returns and destroys Petrus and the gold.

Ivan Ivanovich is a much admired gentlemen in the township of Mirgorod and surrounding farmland. He is described as a perfect gentleman, inquisitive, interested in others, kind to the poor, generous with his wealth and resources. Even down to his bekesha (overcoat) he is considered perfect in every way. Ivanovich has a perfect house with a large porch, thatched roof and posts of oak all the way around. When he opens his windows, branches with apples and pears literally extend into the room and are there for the taking. In the back garden, he has a myriad of fruit and vegentables: plums, cherries, black cherries, sunflowers, cucumbers, melons and beans.

The parish priest holds Ivanovich in the highest regard. He often says that he knows no lay man who better fulfills his Christian responsibilities than Ivan Ivanovich. He is most pious and attends church regularly. When he enters the church, he goes right to the choir and sings along with them. Ivanovich is a generous man offering food to beggars along with some kind words. He has been a widower for ten years. Though he does not have children himself, he allows the children of his servants to climb all over his yard and offers them bagels and other snacks.

Major Kovalevappears in The Nose

Major Kovalev is the unfortunate collegiate assessor whose nose goes missing and begins a life of its own.

Valukaappears in Night Before Christmas

Valuka is the town's blacksmith in the village of Dikanka. Valuka is the most pious person in the entire area. In his leisure time he paints religious pictures and icons.

Ivan Fyodorovich is the meek army sub-lieutenant who inherits his mother's farmstead.

Khoma Brut is the philosophy student who kills the witch who was terrorizing the townspeople. Unfortunately, Khoma loses his faith and is destroyed by the witch's evil spirit.

Aksenty Ivanovich is the journal writer in this tongue-in-cheek story. Ivanovich descends into madness over unrequited love.

Pythagor Pythagorovich Chertokutsky is the aristocratic landowner who boasts about his grand carriage to the officer gentlemen of the new regiment assigned to the B Region of the Ukraine.

Chartkov, is the young artist who abandons his talent for riches and becomes famous for flattering portraits of the aristocracy.

Akaky Akakievichappears in The Overcoat

Akaky Akakievich is the dedicated government clerk who enjoys his job copying documents. The tailor will not fix his threadbare overcoat so Akaky orders a new one.

More summaries and resources for teaching or studying The Collected Tales of Nikolai Gogol.