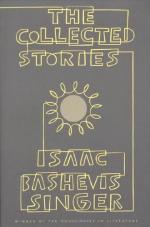 dybbukappears in The Dead Fiddler

According to Jewish folklore, a dybbuk is a disembodied human spirit in search of a living human to possess. In Singer's stories, dybbuks, like ghosts, can be mischievous, evil, or benevolent. The figure of the dybbuk appears in many of these stories. Often, the living characters ascribe events in their life to an unseen and unknown dybbuk. In actual Judaism, special rabbis were once called to perform exorcisms on dybbuks which are similar to the exorcisms to remove demonic possessions practiced by the Catholic Church.

Satanappears in The Unseen, and others

Also known as The Evil One, Satan appears in numerous stories, sometimes as both narrator and character at the same time. The nearly universal presence of evil as objectified in Satan attests to its importance in both Yiddish language and folklore. He is both narrator and participant in Zeidlus the Pope, The Destruction of Kreshev, The Unseen, and The Last Demon. Satan takes many forms from human to animal and evil spirit that inhabits a human body. Satan is cunning, versatile and unpredictable in every situation. Satan ambushes otherwise righteous people and makes them sin, causing the ruin of entire villages.

Rabbi Ozerappears in The Gentleman from Cracow

Rabbi Ozer cautions his congregation about taking gifts from The Gentleman from Cracow, suspecting something amiss. He issues an edict to prevent young women of Frampol from being paraded like prostitutes at a feast demanded by the doctor from Cracow. This doctor reveals himself as Satan at the height of the debauchery. Once Satan has been driven out and some order restored to the town, Rabbi Ozer is memorialized by a statue in the holy plaza.

Gimpleappears in Gimple the Fool

Gimple is a simple and gullible baker who becomes known as a fool in the village of Frampol. He marries Elka, who has a constant stream of lovers visit her right under her husband's nose. She simply denies it when Gimple asks who is in her bedroom, from which he is banished. Meanwhile, Elka bears six children. Before she dies prematurely, she tells Gimple that none of the children are his. In retribution, he pours a bucket of urine into the bread he bakes each night. Then, confused and disillusioned, he leaves the village in search of some kind of genuine experience, free from deception.

Abba the shoemakerappears in The Little Shoemakers

Abba is a shoemaker in the village of Frampol. He has seven sons with his wife Pescha. All of his sons become shoemakers. His children all emigrate to America and Abba becomes lonely and ill. Pescha dies of cholera. He loses all interest in the world and stops working at his shop. One day a steamship ticket to America arrives in the mail for him. It is a gift from his children. He goes to New York where they all greet Abba. Abba settles in a town in New Jersey with his sons, who build him a workshop like the one he had in Poland. Abba comes back to life and resumes his old work habits where he early to work and late to home. His sons occasionally join Abba at his work bench. Abba is contented and pleased with his new home.

The Narratorappears in The Joke, and others

In many stories, the narrator identifies himself as "I" but bears many characteristics in common with Isaac Bashevis Singer, the actual narrator/author. In this fictional mask-within-a-mask, Singer writes of his own experiences as a Polish immigrant Jew who lives variously in New York City or Miami Beach and is a newspaper columnist for a doomed Yiddish newspaper. This occurs in The Cabbalist of East Broadway, A Day in Coney Island, The Joke, Alone, The Admirer, and others. Often, the narrator, a retiring sort of fellow, is seemingly shocked when someone identifies him as the newspaper columnist, but there is also a part of the narrator who secretly flourishes on the recognition. The narrator presents himself as a worldly-wise and reticent observer of human nature whose passions for literature, women, and reflection occasionally come into clear view.

Although not a person, Yiddish is the language that connects all these stories as it connects most of the Jewish communities worldwide. Yiddish developed in the Ashkenazi culture of the Rhineland in Germany around the 10th century, and is a polyglot of German dialects with Slavic languages, Aramaic, Hebrew and bits of Romance languages. It is written in Hebrew, and is spoken in Orthodox Jewish communities, especially as the foundation language in Hassidic communities. The vocabulary and syntax of Yiddish reflects the various cultures and languages in Europe that comprise the Jewish Diaspora.

Yoineh Meir is the educated Hassid who is a contender for rabbi of Kolomir, after the death of the sitting rabbi. Powerful families conspire to appoint their own rabbi—someone other than Yoineh. As a sort of consolation prize, they appoint Yoineh the ritual slaughterer of animals to preserve the kosher tradition. A sensitive man with great compassion for animals and other living creatures, Yoineh allows himself to be convinced he should trade the job. Right away he is appalled and sickened at the task of slaughtering animals for holy feasts. Eventually he goes insane and drowns himself in the river.

Dr, Nahum Fichelsonappears in The Spinoza of Market Street

Dr. Nahum Fischelson is a highly educated academic. He is an adherent to the gloomy views of the misogynistic philosopher Spinoza. Fischelson thinks that other people are all fools and idiots, especially professors who teach Spinoza's views incorrectly to students. He is a hypochondriac who thinks he is dying. He is a man unhappy in the world and in his own skin. Quite suddenly, in his old age, he announces that he is getting married. He goes to the window one night and asks Spinoza's forgiveness because, "I have become a fool."

Tybele is a 33-year-old woman who lives with her husband, Chaim Nossen, in Lashnik. They had three children who all died in infancy. In his grief, Tibele's husband packs up and leaves for the town of Lublin, never to return. The town scoundrel, Alchonen, hears of her desertion and sneaks into Taibele's bedroom one night, Alarmed she asks him who he is. He tells her he is the demon Hurmizah; he threatens and cajoles her into sex and leaves. He continues to visit Taibele every Wednesday and Saturday. Alchonen gets sick and starts to weaken, growing thinner. Taibele offers to help but he refuses since demons do not need human assistance. One day, Taibele sees a corpse being hauled through the streets for burial, feet sticking out. Meanwhile, her demon lover stops visiting her. She follows Alchonon's corpse to burial and reflects that he must have been as lonely as she.

The devil sets his sights on Zeidel Cohen, a learned man from a distinguished Jewish family. Zeidel has no apparent vices that Satan can use to destroy him, but the Evil One discovers that his one character flaw is pride. He appears to Zeidel and tells him he is the greatest schpolar anywhere and tells him he is to good to be buried in a bacvkwater town place like Lublin. The devil tells Zeidel the only thing for him to do is convert to Christianity. Zeidel obeys but when he is old and dying, Satan appears to take him to "Gehenna" or hell. When he gets there, the imps who rake the coals call him "Zeidlus te Firsst" or "the Yeshiva boy who wanted to become pope."