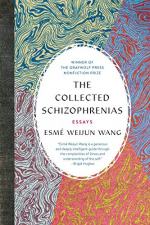 Summary
+Chapters Summary and Analysis
Diagnosis - Toward a Pathology of the Possessed
Yale Will Not Save You -The Choice of Children
On the Ward - The Slender Man, the Nothing, and Me
Reality, On Screen - Perdition Days
L'Appel du Vide - Beyond the Hedge
Important People
Objects/Places
Themes
Styles
Quotes
Topics for Discussion
Order our The Collected Schizophrenias Study Guide

Esmé Weijun Wang
This Study Guide consists of approximately 48 pages of chapter summaries, quotes, character analysis, themes, and more - everything you need to sharpen your knowledge of The Collected Schizophrenias.

The following version of this book was used to create this study guide: Wang, Esmé Weijun. The Collected Schizophrenias. Minneapolis: Graywolf Press, 2019.

The Collected Schizophrenias is a collection of essays exploring the author's experience with schizoaffective disorder, as well as PTSD and Lyme disease. The author also writes about important societal issues that affect those with serious mental health conditions.

In “Diagnosis,” Wang writes about being diagnosed with schizoaffective disorder after suffering from hallucinations. She outlines the DSM-5 criteria for schizophrenia, which includes delusions, hallucinations, and disorganized speech, and notes that she found comfort in her diagnosis, as it meant that she was not “pioneering an inexplicable experience” (5). She also writes of her time working in the Stanford Department of Psychology as a lab manager, in which she diagnosed people with depressive disorder as part of a study.

In “Toward a Pathology of the Possessed,” Wang details the 1988 murder of a schizophrenic man named Malcoum Tate by his sister Lothell. Lothell murdered her brother after he threatened to kill her two-year-old daughter, whom he believed “had the devil in her” (28). The essay also examines California Assembly Bill #1421, which allows for the involuntary hospitalization of the mentally ill. Wang believes this bill denies people with mental health conditions their right to autonomy.

In “High-Functioning,” Wang recalls visiting the Chinatown Mental Health Clinic in order to give speeches about her life to clinicians and other people suffering from mental health conditions. Throughout the essay, Wang describes the many ways in which she goes out of her way to appear high-functioning to the world, including wearing designer clothes and referencing her ivy league education.

In “Yale Will Not Save You,” Wang recounts her year and a half studying at Yale University for undergrad, during which she suffered a serious mental health breakdown and twice required hospitalization. After the second time, she was asked to leave the university and not permitted to return. Wang explains that many colleges and universities have woefully inadequate systems for handling students' mental health issues.

“The Choice of Children” is centered around Wang's stint as a counselor at a camp for children with bipolar disorder. There she met Stuart, a boy with bipolar disorder and autism, who was teased by the other campers. Wang and her then-fiancé C looked after Stuart and helped him make friends, an experience that awakened Wang's maternal instinct. Nevertheless, Wang explains that, as of now, she does not plan to have children because of her mental health condition.

In “On the Ward,” Wang writes about her experiences in mental hospitals, interspersed with a brief history of these facilities in America, including the publication of the 1887 exposé “Ten Days in a Mad-House” (97) by Nellie Bly.

In “The Slender Man, the Nothing, and Me,” Wang explores the 2014 stabbing of 12-year-old Payton Leutner by her best friends, Anissa Weir and Morgan Geyser, who believed they were acting on orders from internet urban legend Slender Man. Wang connects this incident to her own youth, recalling the intense imaginative games she used to play with her own friends. Geyser suffers from schizophrenia, and Wang expresses the hope that the girl will still be capable of some semblance of a normal life in the future.

In “Reality, On-Screen,” Wang outlines her occasional bouts of psychosis that prevent her from discerning fact from fiction while watching television and movies. During these periods of psychosis, Wang must be cautious about the media she consumes, lest she mistake a film's reality for her own.

“John Doe, Psychosis” explores the author's struggled with post-traumatic stress disorder (PTSD) years after having been raped and abused by a high school boyfriend. She writes of the complicated ways in which victims of abuse process and respond to their trauma, and explains how her schizoaffective disorder exacerbated her PTSD symptoms.

In “Perdition Days,” Wang writes about experiencing Cotard's delusion during a period of psychosis in 2013. This delusion causes an individual to believe that they are already dead. With this entrenched belief, Wang suffered from serious depression and agitation, losing her grip on her sense of self. Medical treatment options for this delusion are scant, Wang simply had to wait for the period of psychosis to end.

In “L'Appel du Vide,” Wang writes about the art and life of photographer Francesca Woodman, who died by suicide in 1981 at age 22. Woodman was known for self-portraits, and Wang relates the artist's work to her own life, explaining that she often takes photographs of herself in an attempt to stay grounded in reality during bouts of psychosis.

In “Chimayó” the author writes of her diagnosis with Lyme disease and visit to a Catholic pilgrimage site in New Mexico. People visit the church at Chimayó to pray for healing and to collect a sample of its dirt floor, believed to have mystical powers. Wang explains the difficulty of getting a proper diagnosis for Lyme, and the lack of treatment options once one has that diagnosis. One doctor informs Wang that it is possible she does not have schizoaffective disorder at all, that Lyme may be causing her symptoms of delusions and hallucinations.

In “Beyond the Hedge,” Wang explains her newfound metaphysical belief system after consulting with a woman named Bri, a guru in the “Sacred arts” (192). Bri suggests that individuals suffering from schizophrenia may in fact simply have access to other worlds, beyond what the neurotypical can see and experience. Wang, of course, does not wish to access those worlds, but she uses a grounding technique taught to her by Bri, tying a ribbon around her ankle to keep herself tethered to reality. She notes that, though she will always be a person afflicted with schizoaffective disorder, she has not experienced hallucinations in years.

More summaries and resources for teaching or studying The Collected Schizophrenias.