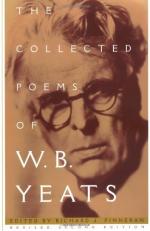 William Butler Yeats
This Study Guide consists of approximately 34 pages of chapter summaries, quotes, character analysis, themes, and more - everything you need to sharpen your knowledge of The Collected Poems of W.B. Yeats.

This detailed literature summary also contains Topics for Discussion on The Collected Poems of W.B. Yeats by William Butler Yeats.

In reality there is more than one character. The role of the shepherd occurs more than once, but each time, there is one- typically male who is viewed as

The character of the shepherd is important for a few reasons. One of these is that his line of work was well known in Ireland. In this sense, the Irish shepherd was to readers the man who might now be called 'John Doe' or 'John Q. Public' or 'A Typical Man.' However, for Yeats, this has to do with the profession, so it is equally true to say that 'the shepherd' is what today would be 'the business man', or 'a laborer'.

The author makes good use of a technique that most readers know and use in their daily lives without much thought: the stereotype, the idea, the job label.

'Construction worker,' 'cop,' 'school teacher,' 'bus driver,' each carries with it a set of presumptions.

Readers today are fortunate if they read Yeats' shepherd poems and actually know sheep and shepherds.

Here is an Indian Hindu priestess. She is also simply 'a woman in love.' She is anxious that a man she is fond of loves another woman. Once her jealousy appears, she is not even remotely nice to the other woman: in fact, Yeats writes that she hopes for something bad to happen to her.

Anashuya asks Vijaya if there is, or has been another woman. He admits this. Anashuya requests, hopes and tries to insist that he not love her anymore. It is not clear whether she is asking him to not have sexual relations with her or if she is purely being emotionally jealous- meaning that even if he is not sexually involved she will suffer from severe jealousy anyways.

In many ways, this makes Anashuya a 'typical woman.' Luckily, not all women are so afflicted by jealousy, but it is very common and certainly worsened if she has been separated from other forms of support- be that financial or emotional.

Here we see that William Butler Yeats has taken to writing about characters immediately upon writing poetry fit for publication.

The first mention of God in the book is the form known as Brahma. Admittedly, this is a contentious issue. In this case, however, Brahma is being treated as at least participating in being God in the same way that all the Sunshine comes from the Sun. Brahma is referred to by Anayusha in the 4th poem of the book for the first time. She obliquely refers to this entity by pointing out that she is a temple priestess. At the end of the poem she asks Brahma for protection.

The following poem has God in the title. The author is exploring religious difference here when he calls this poem 'The Indian upon God.' Sure enough, God is directly called upon and referred to in a number of the poems throughout the entire set of poems. There are poems in which he is not mentioned, but by the end of the work it is very clear that the author recognizes Him. Readers will have the impression that WB Yeats believed in God, most likely through practicing as a Catholic Irishman. At the same time, it is clear that he honors his roots and that he is very proud to be Irish. As a consequence, readers all find references to Druidry in the work. While he mentions that religion, he does not indicate any 'gods of it'.

God is mainly addressed as, prominent, the most powerful. He is an entity who apparently has angel. He is called upon for help.

Mother Maryappears in The Rose

Mary, the Mother of God in the form of Jesus the Christ is written of in the Complete Poetry. There is one poem named for her, and in The Countess Cathleen in Paradise, she is directly mentioned. On the off chance that readers do not know: this was a Jewish woman. The story is that she had a premonitory dream that she would get pregnant by an angel, and that this would give the impression of parthenogenesis. Parthenogenesis is when a female becomes pregnant without male involvement. This happens more than never in nature, across various species but it is exceptionally rare amongst mammals.

Mary is viewed as one of the few living Jews who was without sin. Her husband was not the same as the father of her son Jesus. Her husband had a dream in which he was assured that she was a fantastic woman and just to be happy and confident that even with this unusual circumstance she would make a fine wife for him.

Mary is known to have assisted her spectacular son and to also keep 'out of his way' so as to not hold back his progress.

She appears both early and late in this book.

This character only occurs in the poem entitled 'Who goes with Fergus?' He is described as a powerful being, possibly even immortal. He is not ever set 'equal' to God.

The Loverappears in Multiple Places

The Lover, is like the shepherd in that this a role, but it only exists as a living experience when there is someone playing this role. The Lover is not the same all the time, in real life, even when the role is consistently played by one individual. Such a person can be a suitor, a lover, a hopeful, a boyfriend, a girlfriend, a best friend, someone moody, someone full of sensual and sexual delights, a husband or wife.

There is no gender confusion during any occasion in which the role of lover appears in Yeats' poetry. However, during the course of the entire tome of poetry, there is 'the Lover as a man' and 'the Lover as a woman.'

Readers are actually given great insight into what this character is like based upon how the author shares what 'the Lover' is like whether in the poem 'The Lover asks forgiveness for his changing moods,' or 'The Lover Tells of the Rose in his Heart' or the Figure in the dramatic poem The Seeker.

Oisinappears in The Wanderings of Oisin

This is one of the main characters in The Wanderings of Oisin which is presented as a dialogue between Oisin and St. Patrick. Part of it is dialogue but at the same time, Oisin delivers some stories regarding his life: he is sharing this information with the Saint.

St. Patrickappears in The Wanderings of Oisin

This is the Irish Saint of the Catholics. This is not the only saint, and other religions, such as Buddhism have entities who correspond largely but not exactly, to the Christian saint. St. Patrick is the saint that Oisin speaks with during the writing The Wanderings of Oisin. As such, he is a main character and has the other speaking part.

Aengusappears in The Harp of Aengus

Aengus is some kind of minor immortal. There is no pretense that he is god, but he has some kind of supernatural or superhuman power that gives him the ability to take some actions through time periods that otherwise don't make sense.

Aengus is a strong supporter of romance. His favored instrument is the harp.

Aibricappears in The Shadowy Waters

This character is highly important in the story. He is the most loyal to the man leading the ship. In fact, early on in the story he prevents his boss from being murdered as a mutiny because the sailors have grown insecure on the voyage and are not happy with his decision-making.

Aibric calls his boss Master, which is not to be misconstrued as some kind of an insult.

Forgaelappears in The Shadowy Waters

Forgael is actually the Captain of a boat. He is not a Captain in the same sense of the military rank, but he is the boss. There are only 3 men under him as the small crew can handle the work that is needed. He only appears in the drama The Shadowy Waters.

This woman is the Queen of Cruachan, which is indicative of ancient Ireland in some manner. She is incredibly important within this context. She is referred to in at least one other poem but her name does not cross through a large number of poems the way that Oedipus does.

Oedipus is a fictional character. He is a main character created by the famous Grecian tragedian Sophocles. He is the lead character in the tragic plays: Oedipus Rex, Oedipus at Colonus and Antigone. The short version of his fictive 'life' is: he was born to royal parents. He was abandoned for 2 reasons: 1) because there was a horrible prophesy about him which his parents had found out about, 2) his mother had mercy on him so that he was abandoned rather than killed. Oedipus grows up and becomes a rather powerful man. He is 'gifted.' He finds a woman and they fall in love, even though she is 'an older woman.' The two are shocked and horrified when they find out that they are actually mother and son- and that they have both committed incest and fulfilled the dark prophecy about him by doing so. Oedipus is so upset that, amongst other actions, he gouges out his own eyes and lives through the rest of his fiction-dimension life as a blind man.

More summaries and resources for teaching or studying The Collected Poems of W.B. Yeats.