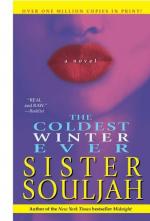 Sister Souljah
This Study Guide consists of approximately 28 pages of chapter summaries, quotes, character analysis, themes, and more - everything you need to sharpen your knowledge of The Coldest Winter Ever.

The Coldest Winter Ever Summary & Study Guide includes comprehensive information and analysis to help you understand the book. This study guide contains the following sections:

This detailed literature summary also contains Topics for Discussion and a Free Quiz on The Coldest Winter Ever by Sister Souljah.

On one of the coldest and snowiest days in New York City, Winter Santiaga is born to a fourteen-year old mother and drug kingpin father, Ricky Santiaga. She grows up in the projects of Brooklyn, along with three younger siblings, insulated from her father's "business" and indulged in every way. With a mother who was more a sister than an appropriate mother role model, Winter came into adolescence a shallow, self-centered, amoral individual, motivated solely by material possessions, physical attractiveness, and the desire to attract as many men as possible, preferably with plenty of money. Even a move to a mansion in Long Island does not remove Winter from her ghetto culture and principles, for there is not positive, active parenting on the part of either parent. When her father's "empire" collapses, he is arrested for a variety of felonies, and all family possessions are seized, leaving the five females in the family to fend for themselves.

Interested only in her own well-being, Winter virtually abandons her mother and sisters, to embark upon an all out effort to find a means to regain her former lifestyle. This quest involves a great deal of creative thought and action and a wild ride of criminal activity. When she is finally turned into the child welfare authorities and sent to an adolescent home for girls, Winter continues her "hustles," taking advantage of the other girls. In her selfishness, she betrays old friends from the projects and is then taken in by Sister Souljah, a crusader for change in the ghetto. Uninterested in Souljah's goals for her, Winter rejects the encouragement to think beyond the next twenty-four hours and to pursue a productive career and moral behavior. Instead, she attempts to use Souljah's connections to continue her "hustles" and pursuit of men with money. Leaving Souljah's home and attempting to travel to Maryland to find Midnight, former lieutenant of her father who has gone "straight," her impulsiveness thwarts this final opportunity for change. Bullet, a drug dealer from the projects, now wealthy himself, swoops her up, gaining total control of her actions and movements. In the end, she is betrayed by Bullet, who leaves her to take the "fall" for his crimes, and she lands a fifteen year prison sentence. Even in prison, Winter fails to take any opportunity for self-improvement, so that she might look forward to some productivity upon release, and accepts her fate as a "normal" part of life. The tragedy, which Winter will never understand, is that she had opportunities at certain junctures to make the right choices and to take positive assistance, but rejected them all in favor of a lifestyle and culture which continues to perpetuate itself.

All characters in this finely woven story, represent the very individuals one finds in every urban slum in America, from drug lords to foot soldiers, from young children, growing up too fast in a culture of violence and moral decay, to adolescents and young adults who have developed no moral foundation for their lives, to adult men and women who, because of their lack of solid values, perpetuate this same destructive and criminal environment into the next generation.

More summaries and resources for teaching or studying The Coldest Winter Ever.

The Coldest Winter Ever from BookRags. (c)2022 BookRags, Inc. All rights reserved.