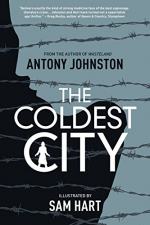 Some of them are saying there’ll be no more secrets, from now on. But you and I both know that’s not true.
-- Perceval (The Coldest City)

Importance: Just before he is shot, Perceval shares with Kurzfeld that he has heard that spies will not be needed any longer after the fall of the Berlin Wall. He assures himself, and Kurzfeld, that there will still be secrets.

BER-2 was running an agent codenamed SPYGLASS, a stasi officer. His most recent gift was a list. Gascoine was delivering that list to us when he was killed.
-- Waddel (The Coldest City )

Importance: Lorraine’s superior officer explains the her the situation under which BER-2, Gascoine, was killed. It is this list that Lorraine is being sent to attempt to locate and intercept from the Russians.

That’s because you don’t know the first bloody thing about this city, so don’t try and pretend you do.
-- Perceval (The Coldest City)