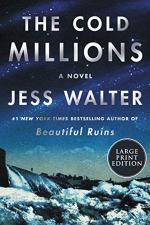 Jess Walter
This Study Guide consists of approximately 39 pages of chapter summaries, quotes, character analysis, themes, and more - everything you need to sharpen your knowledge of The Cold Millions.

This detailed literature summary also contains Quotes and a Free Quiz on The Cold Millions by Jess Walter .

The following version of this book was used to create this study guide: Walter, Jess. The Cold Millions. New York: HarperCollins, 2020.

The novel begins in Spokane, Washington, in the year 1909. There are tensions between industrialists and labor unions, as the unions demand fair wages. The police support the industrialists. After a police officer is mysteriously murdered, civilian and police sentiment worsens towards the unionists. Newly arrived in Spokane are orphans Ryan “Rye” Dolan and Gregory “Gig” Dolan. Rye is 16 years old, and Gig is about 20. Gig feels solidarity with the unionists. One day, during a union protest, Gig and Rye are arrested in association with the unionists. The arrestees are placed in extremely bad jail conditions.

With the help of a few collaborators, Dalveaux lures Flynn and Rye into a trap in a mining settlement called Taft. The collaborators rob Flynn and Rye and plan to kill them. However, Flynn gives an impassioned speech about how she will never give up fighting for the rights of workers everywhere, including the workers currently robbing her. Moved and surprised, the would-be murderers allow Flynn and Rye to leave. Dalveaux is frustrated at this failure. He then learns of a man named Early Reston, a violent anarchist whom Brand had previously hired to incite anti-union sentiment. Brand wants Dalveaux to kill Reston, as Reston has become too unpredictable. Dalveaux realizes that Reston was the person who killed the police officer. Reston kills Dalveaux before Dalveaux can kill Reston.

Rye and Flynn return to Spokane, their fundraising efforts unsuccessful. Police arrest Flynn for her pro-union activities, and Brand secures Gig’s release form prison. Rye and Gig are saddened by their own apparent helplessness in the face of the industrialists’ power. Gig leaves town, and Rye acquires a job in a machinist shop. Rye, feeling guilty for being Brand’s spy, helps Flynn smuggle a article to a newspaper. The article details abuses perpetrate by the police and by industrialists. The article garners national attention for Flynn’s cause, and she is acquitted of all charges. Meanwhile, Gig connects with Reston and helps him plan the assassination of Bran and a high-ranking police officer. However, when Gig realizes that Reston plans to manipulate Rye into being an accomplice, Gig sacrifices his own life to kill Reston and protect Rye.

Rye settles in Spokane and becomes an apprentice to a machinist. Rye then becomes a machinist and joins a labor union. He lives a generally stable life. He marries and has children, and he dies in the year 1964.

More summaries and resources for teaching or studying The Cold Millions.