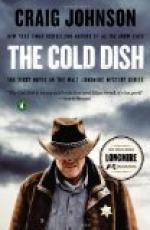 Craig Johnson
This Study Guide consists of approximately 55 pages of chapter summaries, quotes, character analysis, themes, and more - everything you need to sharpen your knowledge of The Cold Dish.

This detailed literature summary also contains Quotes and a Free Quiz on The Cold Dish by Craig Johnson.

A Cold Dish is a mystery in which Sheriff Walter Longmire must investigate two possible revenge murders. Two of four boys guilty of raping a young girl are murdered. The sheriff must figure out which one of the many suspects wanted them dead. The motive is obviously revenge since the boys had gotten off lightly for the crime they committed. Longmire needs to put his own feelings aside and bring the killer to justice.

A young man named Cody Pritchard is found shot to death in a sheep field. Sheriff Walt Longmire and his deputy, Victoria Moretti, investigate the suspicious death. Sheriff Longmire hopes it is a hunting accident, but evidence soon points to murder. The motive for the crime is easily arrived at since Cody was one of four young men who were accused of raping a young Cheyenne girl named Melissa Little Bird. The sexual assault was particularly heinous due to the fact that Melissa has fetal alcohol syndrome and the boys used objects such as bottles and bats during the assault. The boys got off lightly and served very little time for what they had done.

Since the murder is obviously a case of revenge, Longmire has to protect the other three boys who were involved in Melissa’s rape. Bryan Keller, who watched the other boys but did participate or stop them, is kept safe at the sheriff’s office until the killer is caught. Jacob Esper, however, is shot and killed while preparing to go on a fishing trip. His twin brother George, who does not know of Jacob’s fate but fears for his life due to Cody’s murder, is continually running away from Sheriff Longmire. Henry Standing Bear, Longmire’s best friend, is shot when George fears that Henry has come to kill him. George is shot when Longmire tackles him. The sheriff then has to carry an unconscious George down the mountain in a blizzard to his car. Next, he finds his way back up to where Henry is slowly bleeding to death and carries him down to safety as well. George escapes, but Longmire and Henry are rescued by the sheriff’s deputies. Longmire continues to look for and lose George several times. The last time is on the Cheyenne reservation where George is seeking sanctuary from the killer. Unfortunately, just as Henry and Longmire catch up with George, so does the killer. George is shot in the arm, but he lives. Longmire is able to wound the murderer, but they get away.

The list of suspects for the murders of Cody Pritchard and Jacob Esper is a long one. Not only were the Cheyenne angry with the outcome of the trial and the punishment received by the four boys, but a number of townspeople were as well. The sheriff even has to consider the possibility that his best friend Henry could be the one responsible for the death of the boys. Henry is Melissa’s cousin, although he is referred to as her uncle. He is well known for his shooting ability. Longmire has doubts about Henry every now and again, but deep down he knows that his friend would never have committed the murders. It is only when Longmire and Henry are facing off against the murderer for George’s life that they both realize who the killer is. Once George is safely on his way to the hospital with Henry, Deputy Moretti and Longmire go after the wounded killer.

Longmire goes to the house of Vonnie Hayes. He has known her since they were children. He had a crush on her as a teenager and he had just begun to see her romantically. They had even had a first date when she made him dinner at her house. He enters her house and finds her still clutching the rifle she used to shoot Cody, Jacob and George. Vonnie is wounded and losing a great deal of blood. Longmire tries to convince her to let him get her some help, but she does not want it. She tells him that she killed the boys as revenge for what they had done to Melissa. Vonnie was also a victim of sexual assault, but at the hands of her own father. He began assaulting her when she was a small child. He eventually killed himself with the very gun she used to shoot the three boys when his wife was going to tell the world what he had done. Just as her father did, Vonnie ends up shooting herself. Longmire is powerless to prevent her from suicide.

More summaries and resources for teaching or studying The Cold Dish.