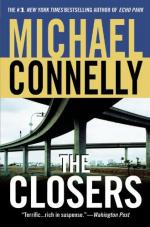 Introduction & Overview of The Closers

The Closers Summary & Study Guide includes comprehensive information and analysis to help you understand the book. This study guide contains the following sections:

This detailed literature summary also contains Bibliography on The Closers by Michael Connelly.

Harry Bosch is an authority figure, sworn to enforce the law. His trouble is that he cares for truth more than law and for authority even less than that. Michael Connelly's The Closers is his tenth mystery novel starring LAPD detective Hieronymus "Harry" Bosch. Though The Closers, published by Warner Books, is the eleventh novel to feature Bosch, it is a standalone work that does not ask the reader to have any prior experience with the character to enjoy the book.

In The Closers, Bosch comes out of early retirement to return to the police force. He has been assigned to work in the Open-Unsolved Unit, solving years-old crimes that have gone cold. In his first case, Bosch and his partner Kizmin Rider investigate the death of a sixteen-year-old Chatsworth girl who was taken from her home and killed on a nearby hill in 1988. Their investigation leads them from the homeless district of downtown Los Angeles, where the victim's father was swallowed by a black hole of grief and alcoholism years before, to the highest offices of the police department itself, where Bosch's old nemesis Irvin S. Irving may be involved in a cover-up.

A successful novelist for over a decade, Connelly grounds his fiction in his real-life experience as a crime reporter in South Florida and Los Angeles, starting when he graduated from college in 1980. His direct contact with actual Los Angeles cold-case detectives has helped him to create an accurate portrayal of the department, its people, and the challenging cases they face. In a 2005 editorial for the Los Angeles Times, Connelly explains what he has learned about cold cases through his research and writing:

Cold-case detectives tell me that there is no such thing as closure, that a violent death leaves a hole in loved ones and even communities that can never be completely filled. They see those holes every time they reopen an old case.

They say there may not be closure, but there always are answers that can be found, and sometimes there is even justice.