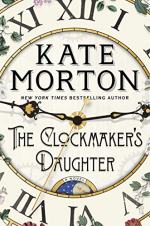 Kate Morton
This Study Guide consists of approximately 102 pages of chapter summaries, quotes, character analysis, themes, and more - everything you need to sharpen your knowledge of The Clockmaker's Daughter.

This detailed literature summary also contains Quotes and a Free Quiz on The Clockmaker's Daughter by Kate Morton.

The following version of the novel was used to create this study guide: Morton, Kate. The Clockmaker’s Daughter. Atria Books, Oct. 9, 2018. Kindle.

In the novel The Clockmaker’s Daughter, author Kate Morton leads her reader through nearly 200 years of the history of Birchwood Manor sharing the impacts the house, and the spirit that lives inside that house, have had on the lives of the residents. Birchwood Manor is built on land said to have been blessed by a Fairy Queen after a human couple protected her children from harm. According to lore, a light can sometimes be glimpsed in the attic window of Birchwood Manor, indicating the presence of these children and symbolizing their mother’s promise of protection. The house serves as a refuge for a variety of characters bowed down by the injustice of life including one of the main characters, Albertine “Birdie” Bell, a teen girl who loses her life there. Birdie’s spirit inhabits the house as she waits for someone to learn the truth about her and her identity as well as the real story behind the disappearance of an heirloom blue diamond, a theft for which she was blamed.

This novel is structured as a frame story in which Birdie tells her story, beginning with the unfortunate circumstances that led her to be in the care of Mrs. Mack, in the first person. Birdie’s story is interspersed with sections narrated by a third person narrator who describes the lives of people who have come in contact with Birdie’s spirit. Birdie describes her life from her earliest memories up until the point she became a spirit and was left behind in Birchwood Manor. She calls herself the clockmaker’s daughter. Her father left her in London with a woman who made Birdie pick pockets to earn her keep. It was not until the day she died that Birdie learned her father had not abandoned her but had been killed by a horse.

While working for Mrs. Mack, Birdie met Edward Radcliffe, a painter, and member of the artists’ group the Magenta Brotherhood. Edward offered Mrs. Mack an obscene amount of money to get her to agree to allow Birdie to work as a model for Edward. One summer Birdie and Edward went to Birchwood Manor together, intending to spend one last summer with Edward’s friends before they went to America. The summer was brought to an early end when a strange man broke into the house. Fanny, Edward’s estranged fiancée was shot dead by the robber. Birdie, who had told Edward her real name was Lily Millington, disappeared, as did the Radcliffe Blue, an heirloom diamond. It was assumed that Lily had been involved in the robbery and had gone to America with the robber.

Birdie’s story is interspersed with the lives of different characters impacted by Birchwood Manor. In 2017, Elodie Winslow found a satchel in which there were sketches of a house that she recognized as the house in the fairy stories her dead mother once told her. She was intrigued by a picture of a woman she found in the satchel. Facing the prospect of marrying a man she did not love, Elodie distracted herself by trying to determine the identity of the woman in the picture.

The story jumps back in time to 1899 when Ada Lovegrove was a student at the school Lucy Radcliffe, Edward’s little sister, opened at Birchwood Manor. Ada was one of the special visitors with whom Birdie interacted. Ada was bullied at school, torture that ended only when one girl drowned and Ada almost drowned during a boating accident. Ada, who could not swim, saw Birdie in the water with her. She also saw a blue light that Birdie instructed her would save her life if she reached out to grab it.

The story jumps forward to 1928 in which Leonard, who was writing a book about Edward and Lily, was staying at Birchwood Manor. Leonard suffered the belief that his affair with his brother’s, Tom’s, fiancee had caused Tom to be killed in the war. During his time at Birchwood Manor, Leonard happened to cross paths with Juliet, a woman with whom he later became friends, when she was honeymooning in Birchwood.

The story makes another jump in time to 1940 when Juliet and her three children took refugee at Birchwood Manor after their home in London was destroyed by a bomb blast. Juliet had just learned that her husband, Alan, was killed in the war. Birdie and Tip, Juliet’s youngest son, make an especially strong connection. Tip referred to Birdie as his friend and told his mother about her. When Juliet later met Ada at The Swan, a restaurant and hotel in Birchwood, Ada suggested that Tip was being truthful about his friend. Juliet later found Tip and Ada in deep conversation.

The story next jumps to the summer of 1862 as the story of what happened at Birchwood Manor is told from the point of view of Lucy. At 13, Lucy believed that she and her brother, Edward, would be best friends their entire life. She noticed a significance about the way that he treated Lily and the way he looked at her. Even though Lucy hated the feeling that Lily had taken over a spot in Edward’s life as the most important female, she could not bring herself to hate Lily.

Lucy was in the house when Martin, Mrs. Mack’s son, came looking for Lily. Lucy overheard them talking about the diamond and going to America. She saw the fear in Lily’s eyes when Martin drug her by the wrist. Wanting to help Lily, Lucy hit Martin over the head and then locked Lily in a secret compartment in the house. Meanwhile, Lucy suffered a head injury herself and could not remember exactly what happened when she was in the house with Lily and the strange man. The police believed that Lily had been working with Martin to steal the Radcliffe Blue. Because both Lily, the diamond, and tickets to America that Edward had bought for himself and Lily were missing, it was inferred that assumption was true. Because she could not find any evidence to the contrary, Lucy believed the story the police put together.

Several years later, Lucy found the suitcase she had taken with her to Birchwood Manor. She had never unpacked it when she returned because she wanted to forget what had happened. When Lucy found the Radcliffe Blue diamond in her case, she remembered that she had been trying on the necklace when Lily came to the house looking for her. Lucy dropped the gem into her pocket when Martin arrived. She realized at that time that Lily had probably died locked in the secret compartment. Lucy was able to confirm her fear when Edward died and left Birchwood Manor to her 20years after Lily’s disappearance. Lucy buried Lily’s remains along with a letter detailing the facts of Lily’s life in a casket in the front yard. She planted a Japanese maple sapling over the grave.

One hundred and thirty-five years after Lucy buried Lily’s remains, a storm uprooted the maple tree. Elodie and Jack, who was living in Birchwood Manor looking for the diamond, had spent the night together in the house because Elodie’s taxi never came to pick her up as a result of the storm. They saw that there was something hidden in the hole beneath the uprooted maple tree and planned to dig it up. Birdie, meanwhile, indicates that she intends to stay in the house because she feels she has grown to be a part of it.

More summaries and resources for teaching or studying The Clockmaker's Daughter.