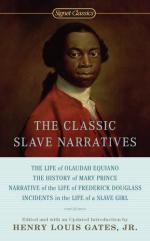 Various
This Study Guide consists of approximately 31 pages of chapter summaries, quotes, character analysis, themes, and more - everything you need to sharpen your knowledge of The Classic Slave Narratives.

This detailed literature summary also contains Topics for Discussion and a Free Quiz on The Classic Slave Narratives by Various.

Gustavus Vassas was born Olaudah Equiano in the African province called Essaka in 1745. He was the youngest son of seven surviving children and was very close to his mother. He describes a happy childhood during which he learned - as all his people did - to work hard. He is kidnapped and taken as a slave while still very young and soon finds that he has a talent for the sea and for trading. By being very frugal, he is able to save enough to buy his freedom after only a few years, though his master initially refuses to honor their agreement for the sale. He does gain his freedom and soon returns to the sea, seeing there a greater opportunity for financial gain than any other he can find. He spends his time also in pursuit of an acceptable religious affiliation and eventually finds himself ready to become a missionary.

Mary Prince writes that she was born in Bermuda at a place called Brackish-Pond. She and her mother are sold and Mary is friends with a young child of the new household. Mary admits to being very happy during this time and says it's because she was too young to realize her condition as a slave and to know what the future holds for her. Then Mary's mother is forced to take three of her daughters to town to be sold. Her new situation is much worse and she hasn't the comfort of family near. She works hard, for a period of time in a salt mine and later as a caretaker for a child. Her health deteriorates rapidly and she is on one occasion near death. She holds to the idea that she has a right to freedom and when her master literally kicks her out of the house, sets about to achieve that goal and to be able to return to her husband.

Fredrick Douglass notes that he doesn't know his age and equates that as one of the basic rights of a person that is denied a slave. He is industrious and works hard, finally learning the skill of caulking ships. He earns money which his master takes, leaving Douglass only a pittance. Douglas eventually escapes to New York, sends for his intended wife, Anna, and is happy to work for a living as a freedman, though the work is manual labor and difficult.

Harriett Jacobs is born into slavery and soon finds herself in the home of Dr. Flint, and older man who often has sex with his slaves. To avoid his advances, the sixteen-year-old Harriett engages in a relationship with a free white man who fathers two children. Those children as used as leverage against Harriett but she preservers in her attempt for freedom. She finally escapes and lives for almost seven years in the cramped attic of her grandmother's home, able to hear her children playing below but never daring to let them know she's so near. She eventually makes her way to New York, is constantly pursued by the daughter of a previous owner who claims to still have a hold on her and her children and plagued by broken promises of freedom. There she becomes friends with a woman of means who eventually buys her freedom and Harriett notes that her story ends with that gift of freedom.