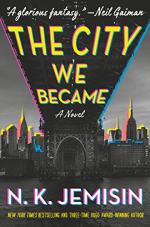 The City We Became Setting

N. K. Jemisin
This Study Guide consists of approximately 36 pages of chapter summaries, quotes, character analysis, themes, and more - everything you need to sharpen your knowledge of The City We Became.

The Bronx Art Center is a nonprofit gallery and studio space where Bronca works. The Center promotes artists in the Bronx community. Unlike galleries in Manhattan, that exclusively showcase privileged white artist, the Center focuses on community action and promoting diversity. When the Bronx Art Center is consumed by the white tendrils it symbolizes the decimation of cultural diversity by racism.

More summaries and resources for teaching or studying The City We Became.

The City We Became from BookRags. (c)2021 BookRags, Inc. All rights reserved.