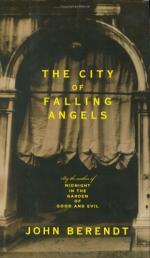 The City of Falling Angels Summary & Study Guide includes comprehensive information and analysis to help you understand the book. This study guide contains the following sections:

This detailed literature summary also contains Topics for Discussion and a Free Quiz on The City of Falling Angels by John Berendt.

John Berendt arrives in Venice three days after a terrible fire has destroyed the historic Fenice. He acknowledges that his arrival during this time is purely coincidental, as he had planned the trip months ago. He had wished to visit Venice during the off-season for tourists because he wanted to capture the essence of Venice; an essence, according to him, that lies within the Venetians. After his arrival, Berendt is intrigued by the fire and by the investigation into the fire. He decides to take up residence in Venice for a few months to write a book on the city of Venice and the Venetians. Berendt rents an apartment from Peter and Rose Lauritzen, who live upstairs from his apartment. They are quick to tell him the history of the Fenice, as well as their theory on what really happened. Rose also shares with Berendt how to get the resident discount. She explains to him that all tourists are overcharged or otherwise taken advantage of. She shares the secrets of where he should make himself known in order to be charged the same amount as a citizen of Venice rather than as a tourist.

During the course of Berendt's residence, he meets several people, famous and otherwise. He becomes friends with Count Girolamo Marcello who shares his theories with just about anyone who will listen. Berendt also becomes friends with a painter, Ludovico de Luigi, with whom he spends a lot of time while in Venice. In addition to making friends, Berendt also takes up the task of interviewing several important people. The topic of conversation during most of Berendt's interviews is the Fenice fire, although, he does discuss other things: Ezra Pound's affair, Philip and Jane Ryland, and the Seguso family dispute.

After the first investigation is done, the fire is ruled accidental. However, later on in the book, the fire is investigated again and this time is ruled arson. Berendt is surprised at the ruling and is chastised by Ludovico. Berendt shares the details of the trial of the two electricians charged with the arson: Enrico Carella and Massimiliano Marchetti. Berendt meets with the prosecutor, Felice Casson to discuss the theory behind the charges and gets a full in-depth look into Casson's mind. The two electricians are found guilty and sentenced to six and seven years in prison. Marchetti surrenders himself while Carella is nowhere to be found. During all of the trial, the Fenice is being rebuilt. The original company that is hired to do the reconstruction is forced to stop work two weeks into the job. Another company takes over, but cannot begin work until the dispute is settled. Finally, the Fenice is unveiled and the story comes to a close. Berendt does not leave any open holes though; he fills the reader in on what happened in every event he discusses.

The City of Falling Angels from BookRags. (c)2022 BookRags, Inc. All rights reserved.