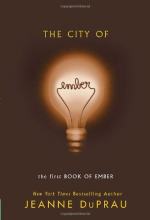 Jeanne DuPrau
This Study Guide consists of approximately 34 pages of chapter summaries, quotes, character analysis, themes, and more - everything you need to sharpen your knowledge of The City of Ember.

The City of Ember Summary & Study Guide includes comprehensive information and analysis to help you understand the book. This study guide contains the following sections:

This detailed literature summary also contains Topics for Discussion and a Free Quiz on The City of Ember by Jeanne DuPrau.

Lina Mayfleet and Doon Harrow are both twelve years old. They are members of the Highest Class of the Ember School. As the book opens, it's Assignment Day or the day the twelve-year-olds are given their jobs. The assignments are arbitrary. There are jobs written on slips of paper in a bag and each student draws a slip to determine his job. Lina is assigned to work in the Pipeworks and Doon is assigned to be a messenger. Doon is certain that the city is in trouble and says so. He trades assignments with Lina, hoping he can do something good for the city if he's working in the Pipeworks. Lina accepts the trade, loving the idea of being a messenger.

The two children know the city's electricity is provided by a huge generator powered by the river under the city. The generator has recently left the city in the dark several times and Lina fears each time will be forever.

The children soon have a series of clues that leads them to a shocking discovery. Lina delivers a message to Mayor Cole from a shopkeeper named Looper about a delivery that evening. Lina finds a set of "instructions," though her baby sister Poppy chews on the paper leaving holes in it. Lina's friend Lizzie has cans of wonderful food that has not been available in Ember for years and Looper has colored pencils. Lina and Doon work on the instructions Lina found and, with the help of their friend Clary, realize it's instructions for leaving Ember - a feat most people believe is impossible. Doon and Lina discover the Mayor has been hoarding supplies and relate the information to a guard without knowing that the guard is in on the secret. When Doon and Lina face arrest for spreading "vicious rumors" about the Mayor, they flee Ember using the instructions.

It's only when they are outside the city that they put their history together. More than two hundred years earlier the Earth was facing destruction. A group of "Builders" created Ember underground and populated it with three hundred inhabitants, most too young to remember a life before Ember. The adults promised never to talk about a life outside Ember. The builders also left a box in the charge of the Mayor with instructions to pass it down to each new Mayor. But along the way the box got shoved into Lina's closet which is how Lina came to have them.

Outside their underground world for the first time, Lina and Doon are amazed at the animals, the moon, the stars, the fruit, and the sun. They realize they've left nothing behind to tell others how to get out of the city and that the generator is certain to fail soon. They can't return the way they came out because the current of the river is too strong. They wander around and find a crevice in the ground. Looking down, they can see Ember. They write instructions for leaving on a piece of paper and throw it down to the people left behind.

More summaries and resources for teaching or studying The City of Ember.

The City of Ember from BookRags. (c)2022 BookRags, Inc. All rights reserved.