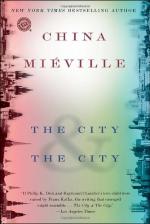 China Miéville
This Study Guide consists of approximately 33 pages of chapter summaries, quotes, character analysis, themes, and more - everything you need to sharpen your knowledge of The City & the City.

The City & the City Summary & Study Guide includes comprehensive information and analysis to help you understand the book. This study guide contains the following sections:

This detailed literature summary also contains Topics for Discussion on The City & the City by China Miéville.

"The City & the City" is a novel by the New York Times best-selling author China Mieville. The story follows Inspector Tyador Borlu of the Extreme Crime Squad in the European city of Beszel, as he investigates the murder of a woman dumped in one of the town's riskier neighborhoods. Beszel shares a border crossing with the city of Ul Qoma. With political and cultural unrest between the two cities, the people of one city have to "unsee" anything occurring in the other city, even when the streets or areas of the cities overlap each other.

As the investigation continues, Inspector Borlu is able to identify the dead woman as a Canadian earning her Ph.D. at an archeological dig is the opposing city of Ul Qoma. It is an anonymous phone call that leads Tyador to uncovering the identity of woman. As the investigation continues, twists and turns lead Tyador to join forces with his counterpart in Ul Qoma. The Ph.D. student seems to have an obsession with a secret city between the two cities, known as Orciny.

One of the politicians leverages the student's desire to uncover the secret city to get her to steal artifacts from the dig site. When she finds out that it is simply a cover up for an American corporation to profit, they have her killed and dump her body. Even after the mystery is solved, people in the city and the other city "unsee" what they saw as chaos erupted and the truth is uncovered.

More summaries and resources for teaching or studying The City & the City.

The City & the City from BookRags. (c)2022 BookRags, Inc. All rights reserved.