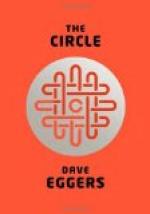 Dave Eggers
This Study Guide consists of approximately 78 pages of chapter summaries, quotes, character analysis, themes, and more - everything you need to sharpen your knowledge of The Circle.

The Circle Summary & Study Guide includes comprehensive information and analysis to help you understand the book. This study guide contains the following sections:

This detailed literature summary also contains Quotes and a Free Quiz on The Circle by Dave Eggers.

NOTE: Due to the structure of this novel, this study guide has been broken up into sections according to page numbers. This guide specifically refers to the First Vintage Books Edition, May 2014, paperback. Accordingly, quotes are referenced by page numbers.

“The Circle” is a cautionary contemporary dystopian novel of technology by Dave Eggers in which an internet-technology company, the Circle, seeks to make accessible all information in the world, in which it would not only control that flow of information, but would make it mandatory for all people in the United States to have an online account with them for the purposes of doing anything from shopping to voting.

When the novel begins, Mae Holland, a girl of 24, has just been given a job at the Circle, one secured through the help of her best friend, Annie Allerton. Mae is thrilled to be working for the biggest, most influential internet-technology company that there is.

Their company has gone beyond mere internet usage, as Mae soon finds out. For example, she meets two women who are developing a submarine that can descend to the lowest levels of the Marianas Trench to bring up sea creatures for study. As a result of the unique job Mae is given, where she wears a camera nearly 24 hours a day, she is given nearly free-run of the Circle campus, and has innumerable viewers, to whom she shows off the campus, developing technologies, sits in on meetings, and so on. She is well-loved the world over, and privacy becomes a thing of the past for millions. However, she has several mysterious run-ins with a man named Kalden, who reveals his true identity to Mae off-camera.

Kalden is actually Ty, the original founder of the Circle. Ty has come to loathe the Circle, for it has become a monster. He originally developed it for fun, to help people, not to control them or hurt them, as is now happening. He believes people have a right to privacy, that some things shouldn’t be known, and that people need to respect one another’s boundaries. They should especially, he reveals, have the right and the option to opt out. Ty says that the Circle has become dangerous because it controls the flow of information in the world. The Circle was meant to provide access to information, not control all of it.

This, coupled with the move by the Circle into the public sphere – to take over voting and government services – is totalitarianism. Mae is stunned. Ty tells her that he can take apart the Circle from the inside before it is too late, but that he’ll need her help and her influence by way of her viewers to help people see the truth of things. Mae is not sold. She has been completely brainwashed by the company and what its goals are. She cannot objectively reason outside of it, and so she turns Ty in to her superiors.

They cannot kill Ty, but merely relegate him, for the mythology surrounding his person make him invaluable to the company. Mae continues to advance in the company, amazed that Ty nearly ended the world. The novel ends with Mae visiting her comatose friend, Annie, in the hospital, and wondering what her mind is doing. She decides that everyone in the world has a right to know Annie’s thoughts.

More summaries and resources for teaching or studying The Circle.

The Circle from BookRags. (c)2022 BookRags, Inc. All rights reserved.