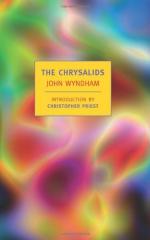 This Study Guide consists of approximately 45 pages of chapter summaries, quotes, character analysis, themes, and more - everything you need to sharpen your knowledge of The Chrysalids.

The novel is told in the first person and the past tense. The narrator, David, is an adult of undisclosed age reflecting on his childhood.

As a boy, David often had a recurring dream of a big city on a bay. The dream was odd because he did not know what a city was. He had never even seen the sea before. His older sister, Mary, told him he might be seeing, “the wonderful world that the Old People had lived in; as it had been before God sent Tribulation” (5). She warned him not to mention these dreams to anyone as others did not see such pictures in their heads. David took her advice, noting “Without it I might have mentioned the curious understanding I had with my cousin Rosalind, and that would certainly have led us both into very grave trouble” (6).

More summaries and resources for teaching or studying The Chrysalids.

The Chrysalids from BookRags. (c)2022 BookRags, Inc. All rights reserved.