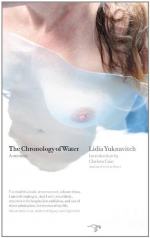 Yuknavitch, Lidia
This Study Guide consists of approximately 57 pages of chapter summaries, quotes, character analysis, themes, and more - everything you need to sharpen your knowledge of The Chronology of Water.

The Chronology of Water Summary & Study Guide includes comprehensive information and analysis to help you understand the book. This study guide contains the following sections:

This detailed literature summary also contains Topics for Discussion on The Chronology of Water by Yuknavitch, Lidia .

The following version of this book was used to create this study guide: Yuknavitch, Lidia. The Chronology of Water: A Memoir. Portland: Hawthorne Books & Literary Arts, 2010. Print.

Lidia Yuknavitch’s story is not structured like a conventional memoir; it recounts episodes from Lidia’s life from when she was a very young child until she is in her forties, but events occur out of order. The book’s five sections are divided into short chapters that explore a single, experience, incident, or idea, but the vignettes do not follow a straight timeline. In the opening chapter, “Chronology of Water,” the author explains that memories come in fragments because one’s life happens without order. There is no set chronology and all events “swim in and out between each other” (38). When Lidia thinks about her life—her love of art, when she first rode a bike, how much she adored her sister, the day her father "first touched" (38) her—there is no linear sense to it. We use language, which is just as chaotic as memory, she says, to “narrativize” the fear we experience in our lives. This memoir is thus Lidia’s attempt to “narrativize” (38) the turbulence, chaos, and pain she has undergone and to make her own meaning out of her life.

The memoir does not follow a linear progression, and the author explains that what holds it together, what provides it with structure, form, or “chronology,” is water. Water begins and ends the story, is used as a frame to hold events, and appears over and over to mark the significance of people and ideas. The first section opens with Lidia showering after her daughter is stillborn and then moves back and forth to describe events of her early life until her daughter’s memorial. We learn that Lidia is an anxious, silent child who grows up in the Northwest with an alcoholic mother and a volatile father who sexually abuses her and her older sister. She is a gifted swimmer from an early age, and trains competitively. The family moves to Florida when Lidia is 15, where she becomes increasingly angry and aggressive, engages in self-destructive behavior, has sex with numerous male and female partners, and drinks heavily. She escapes her household on a swimming scholarship to Texas Tech, where she continues to drink and take drugs before flunking out of school. She marries Philip, a mild-mannered fellow student whom she treats cruelly. She becomes pregnant and moves in with her sister in Oregon, but she loses her baby. The section ends with Lidia casting her daughter’s ashes into the ocean.

The second section, which begins with a scene of drowning, focuses on Lidia’s relationship to her father and her “substitute father,” the writer Ken Kesey. We learn about Lidia’s father, who was abused as a boy by a male mentor, served in the Korean War, was a gifted artist, and enjoyed a career as an award-winning architect. He also terrorized and abused her, including causing her to crash and rupture her hymen while teaching her to ride a bike when she was 11. When he is an old man, Lidia’s father drowns but does not die, and the hypoxia he suffers causes brain damage that robs him of his memories, including his abuse of his family. In contrast to her own father, Lidia's literary father Ken Kesey offers her comfort and safety. She meets him when she sits in on a creative writing class at the University of Oregon and bonds with him because he has also lost a child. He nurtures and encourages her to be a writer. However, Kesey’s life is also troubled; he is an alcoholic who eventually “drowns” in drink.

The third section explores Lidia’s relationship with various women in her life, including her mother, her “literary mother” Kathy Acker, and her lovers Hannah and an unnamed photographer from New York. It also explores her desire to connect to something other than her family. The section begins with Lidia as a carefree child swimming in a pool and details some rare happy childhood moments. It also describes the sexual abuse she suffered from her father, her early rejection of the religious patriarchy and recognition of the damaging roles and rules imposed upon women, her early sexual attraction to girls, her struggles in becoming and accepting herself as a writer, her sexualizing of her whole existence, her obsession with death and escape from the world, and her violent, masochistic sexual relationships. Lidia ends the section by describing her literary and sexual relationship with Acker, another nurturing parent figure who encouraged Lidia to pursue her writing.

The fourth section describes Lidia’s alcohol-fueled relationship with her second husband and her emergence from a destructive existence with him to start on her journey to becoming a writer. As the section opens she is “drowning” in alcohol, but writing saves her from being pulled down completely. Still, although she has success, Lidia cannot come to terms with the pain of her past and continues to have doubts about her worth as a person and her talent as a writer. She tries to take comfort from other women writers and establishes a sanctuary of her own where she can write.

The final section details Lidia’s final transformation to becoming a writer and a new person—a wife, mother, friend, and community member—with a sense of dignity and worth. It begins with Lidia becoming drunk again after learning that her ex-husband has found a new partner. She crashes into a pregnant woman on the freeway and is required to go to rehab and do community service as punishment. She returns to her teaching job at San Diego State University, where she meets and falls in love with a graduate student, Andy. They marry and have a child, and Lidia writes and has literary success. More importantly, she accepts her success as deserved and acknowledges her identify as a writer. Lidia has made a new life, home, and family, and her writing has enabled her to come to terms with her past by “narrativizing” it. She ends her book by explaining that writing has transformed her life, and that her book has allowed her to rewrite her experiences in her own terms. She describes her book as “water I made a path through” (303) and invites the reader to join her in it—to understand her experience and feel the consoling, transforming power of art.

More summaries and resources for teaching or studying The Chronology of Water.

The Chronology of Water from BookRags. (c)2022 BookRags, Inc. All rights reserved.