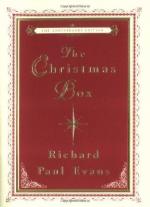 Richard Paul Evans
This Study Guide consists of approximately 27 pages of chapter summaries, quotes, character analysis, themes, and more - everything you need to sharpen your knowledge of The Christmas Box.

The Christmas Box is a sentimental Christmas story written by Richard Paul Evans for his daughters. The story centers around a Christmas box Richard finds in the attic of the home of an elderly lady with whom he and his family have come to live. The box, originally intended to hold a Bible, has within it several letters that the owner has written to a dead loved one. Through the discovery of this box and the letters within, Richard discovers the true meaning of Christmas. The Christmas Box is a lesson in life that will bring a tear to the eye of all who read it.

Richard and Keri Evans have only been married a short time and Richard is attempting to begin a new business. They live in such a cramped apartment that their daughter, who is four, is forced to remain in a crib. When Keri finds an ad in the paper advertising for a young couple to live and take care of an elderly lady, she jumps on the opportunity. Keri convinces Richard to talk to the woman. Richard and Keri for an interview with the woman, Mary, and find her kind and generous. Mary offers them the entire west wing of her home in exchange for a few household chores they would have to do in their own home anyway. Richard and Keri quickly move in with Mary and the four of them promptly become a family.

While moving in, Richard and his brother-in-law store a bunch of their furniture in Mary's attic. Barry, the brother-in-law, finds a cradle covered by a sheet, surprising both men because Mary has said she has no children. Then Richard finds a tie press. Finally, Richard finds a Christmas box that is beautifully carved. Richard admires the box before putting it back where he found it. Later, Richard has vivid dreams about an angel. After these dreams, he hears music that leads him back to the Christmas box in the attic. Upon opening the box, Richard finds what he thinks are love letters inside. Richard reads one of these letters, feeling like a voyeur, and leaves the rest.

Mary is diagnosed with a brain tumor just a few weeks before Christmas. Mary begins to urge Richard to spend more time with his daughter and asks him odd questions about the first gift of Christmas. Richard finds this behavior odd, and thinking it has something to do with her past, he takes one of the letters from the Christmas box to a friend of Mary's. This friend promises to explain the letters on Christmas Eve. In the meantime, Mary takes a turn for the worse and is hospitalized. When the friend comes for Richard on Christmas Eve he takes him to a cemetery close to the house. In the cemetery, the friend describes the terrible grief of a woman he witnessed as a child. Soon he shows Richard the grave of a child that is decorated by a great stone angel, the same angel from Richard's dreams. This is how Richard learns that the letters were meant for a child Mary once lost. Richard returns to the box and reads the rest of the letters, finally understanding Mary's pressure on Richard to spend more time with his daughter. While saying goodbye to Mary in the hospital shortly before her death, Richard tells Mary that he finally understands what the first gift of Christmas was. The first Christmas gift was the love of a parent for her child. Shortly afterwards Mary dies and returns to the arms of her beloved child.

More summaries and resources for teaching or studying The Christmas Box.