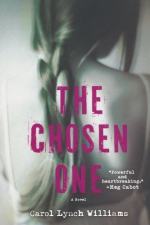 The Chosen One Summary & Study Guide

Carol Lynch Williams
This Study Guide consists of approximately 20 pages of chapter summaries, quotes, character analysis, themes, and more - everything you need to sharpen your knowledge of The Chosen One.

The Chosen One Summary & Study Guide includes comprehensive information and analysis to help you understand the book. This study guide contains the following sections:

This detailed literature summary also contains Topics for Discussion on The Chosen One by Carol Lynch Williams.

The Chosen One is a novel by writer Carol Lynch Williams. Kyra is a thirteen-year-old girl who lives in an isolated community governed over by a prophet. The Prophet's word is law and everyone must obey it, even when the Prophet orders Kyra to marry her own uncle. Her uncle is a man more than forty years her senior who already has six wives. Kyra wants to be obedient, she wants to do what her three mothers and her father tell her, but the idea of marrying her own uncle is too overwhelming. Not only that, but Kyra has already found a boy who wishes to choose her as his first wife. However, the Prophet's word must be followed. The Chosen One is an honest look into the traditions and culture of a religious sect from the point of view of a young girl educated just enough to question the ultimate authority of her community's chosen leader.

Kyra attends a family meeting in which the Prophet is expected to join the family. Kyra's three mothers, twenty siblings, and father are all very excited by the Prophet's visit because they hope it means that he has decided to honor their father with becoming one of the apostles. However, they soon learn that the Prophet's visit has little do with their father, but is about Kyra. Kyra will be fourteen soon, of marrying age in her community. The Prophet tells the family that he has had a vision from God telling him that Kyra is meant to marry Hyrum, her father's brother.

Kyra is shocked by this announcement and refuses the idea. Hyrum is much older than Kyra and at least twenty years older than Kyra's father, and already has six wives. This makes the match completely incomprehensible to Kyra. Kyra rushes away from the family home, leaving her eight-month-old sister sobbing in her absence. Kyra wonders if she is being punished for sinning. Kyra has been sneaking away for months, visiting a mobile library that passes by the enclosed Compound once a week, borrowing and reading novels that have been banned by Prophet Childs. Not only this, but Kyra has also been sneaking away from her mother's trailer at night to visit Joshua Johnson, a young boy a few years older than herself. In fact, in her shock and fear at the proposed marriage, Kyra goes to Joshua.

Joshua promises that Kyra he will fix things somehow. At the same time, Kyra's father promises to go to the Prophet and talk him out of this marriage. However, the Prophet is determined to see Kyra marry Hyrum and refuses to back down. Hyrum visits the family and arranges a date with Kyra. Not long after this, Kyra and her mother's make a trip into town to buy material for Kyra's wedding dress. The only thing helping Kyra deal with the reality of her situation is the hope that Joshua might be able to convince the Prophet to allow him to choose Kyra instead of Hyrum.

Kyra's date with Hyrum is a disaster, in part because of the open jealousy of his first wife. Later, Kyra is taken to the Prophet's office where she finds Joshua beaten and battered. Kyra and Joshua are accused of adultery and threatened with the ultimate punishment, death. However, Hyrum agrees to marry Kyra despite her indiscretions with Joshua. Kyra is beaten and sent home. That night, Joshua comes to Kyra and tells her he is leaving with a group of boys and that he will one day come back for her.

Kyra is desperate to find a way out of her situation. When she goes to visit the mobile library one last time, the librarian can see her bruises and her depression and offers to help. The man tries to drive Kyra into town, to get her out of her situation, but the mobile library is run off the road and the man killed. However, Kyra managed to hold on to the man's cell phone. Kyra runs again, but manages to call the police before the Prophet's men can overtake her. Kyra is rescued, taken to a strange world she does not understand, away from the people she loves most.

More summaries and resources for teaching or studying The Chosen One.

The Chosen One from BookRags. (c)2022 BookRags, Inc. All rights reserved.