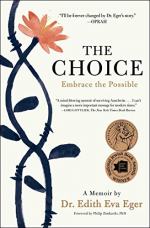 Dr. Edith Eva Eger
This Study Guide consists of approximately 87 pages of chapter summaries, quotes, character analysis, themes, and more - everything you need to sharpen your knowledge of The Choice.

The Choice Summary & Study Guide includes comprehensive information and analysis to help you understand the book. This study guide contains the following sections:

The following version of this book was used to create this study guide: Eger, Dr. Edith Eva. The Choice: Embrace the Possible. Scribner, 2018.

In first-person narrative, the author considers her life before, during, and after the near-death experience of being incarcerated by the Nazis near the end of World War II. To reflect the various tonal and narrative qualities of the writing, the author will be identified as “Dicuka”, which was / is her nickname within her family, during the sections focusing on her childhood, youth, and young adulthood. She will be also be identified as “the author” or “Dr. Eger” in sections where she offers comment and/or insight on the incidents from earlier in her life. In short, “Dicuka” is the younger version of the author or Dr. Eger.

Before Dr. Eger’s narrative begins, there is a Prologue written by one of her colleagues, a Dr. Philip Zimbardo. He describes being present during one of Dr. Eger’s talks at the college where he teaches, the development of their friendship, and the inspiring qualities of how she has come to live her life and of what she has to say about the totality of her experiences.

The author’s own narrative is divided into four parts. Part I is entitled “Prison,” and begins with an introduction describing how, many years after her actual experience in Auschwitz, Dr. Eger continued to experience flashbacks to what had happened to her there. She also describes the basics of her philosophy as a psychotherapist, and uses the example of one of her clients, a military veteran named Jason, as an example of how she applies that philosophy.

The narrative proper begins with an image from Dr. Eger’s memory, that of being with her mother and sister in a long line, a moment that the author says summarizes her entire life. In the rest of Part I, the author describes her early life in Hungary, commenting on the apparent discomfort in the marriage between her parents, the flirtatiousness of her oldest sister Magda, and the musical skills of her next-oldest sister, Klara. She also describes how their life together came to an end as a result of the Nazis rounding up Hungarian Jews and shipping them to various concentration camps, including Auschwitz, the camp to which the author and her family were sent. The remainder of Part I details the author’s various experiences while there, in terms of both suffering and surviving.

Part II is entitled “Prison.” In its four chapters, Dr. Eger describes both the immediate and the longer-term aftermath of her release from imprisonment. Even the earliest stages of recovery take a long time, although she makes friends that return later in life, and is also reunited with family. She marries relatively soon after her release, and has a baby. Shortly after the child’s birth, however, she and her family feel the need to leave Hungary as a result of pressure from the Communist government. At first, they plan to travel to Israel, but then are presented with an alternative when they learn they have the correct papers to immigrate to the United States. They are faced with a difficult choice, one that at first, the author makes without the support of her husband, Bela.

Part III, entitled “Freedom,” begins with a description of the family’s arrival in America, Bela having agreed to join his wife. Part III is the longest section of the book, describing the family’s struggles as they attempt to integrate into American society and develop individual lives and identities. They eventually find their way to El Paso, Texas, where they make a successful life for themselves. There are two more children, extensive education for the author as she earns her doctorate, and some difficult choices when her reputation as a successful psychologist draws her into encounters with her trauma. One of those encounters eventually leads her to revisit Auschwitz, where she is finally able to reach a degree of peace with her past, and her survival of that past.

In Part IV, which is entitled “Healing,” Dr. Eger describes the different ways in which she drew upon her past as part of her work as a therapist. She also describes ways in which working with her various patients taught her more about herself, and about how to find positive value in her negative experiences. Part IV and the book both end with a chapter titled “Liberation Day,” in which Dr. Eger describes giving a speech to a group of military service personnel who belong to the same unit that freed her from her imprisonment. She concludes her story with a direct address to the reader, urging them to find their own ways to choose to be free.

More summaries and resources for teaching or studying The Choice.

The Choice from BookRags. (c)2022 BookRags, Inc. All rights reserved.