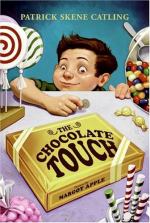 Patrick Skene Catling
This Study Guide consists of approximately 30 pages of chapter summaries, quotes, character analysis, themes, and more - everything you need to sharpen your knowledge of The Chocolate Touch.

This detailed literature summary also contains Quotes and a Free Quiz on The Chocolate Touch by Patrick Skene Catling.

“The Chocolate Touch” is a young adult novel by Patrick Skene Catling, based on the story of King Midas, who turned into gold everything he touched. In “The Chocolate Touch”, John Midas is a boy who is selfish, dishonest, and cannot get enough chocolate. He spends all his lunch money on chocolate, sneaks chocolate before meals, and never shares his chocolate with anyone. One Sunday afternoon, while strolling through town, John finds a peculiar silver coin on the sidewalk, with a picture of a fat boy on one side, and the initials JM on the other side. He intends to start a coin collection with it, but comes across a small candy store filled to the brim with sweets. The store owner waves John in.

The store owner explains that he only produces chocolate from the finest ingredients, and he is having a special sale that day, accepting only the kind of money that John has found on the sidewalk. John willingly exchanges the coin for a giant box of chocolates, races home, and hides the box under his bed. That night, he unwraps the box to find layers of packaging, and only one small, gold-wrapped chocolate ball, which he eats. It is the most delicious piece of chocolate he has ever eaten in his life. He then goes to sleep.

In the morning, John wakes up to brush his teeth, and is amazed to discover the toothpaste he uses is chocolate-flavored. He is thrilled at breakfast to discover that his bacon, eggs, and orange juice turn to chocolate the instant he eats them. Indeed, anything his mouth touches – from his leather gloves to his pencil in class – turn to chocolate. Unfortunately, as the morning wears on, John begins to get thirsty, but all the water he tries to drink only turns to chocolate. At orchestra practice, John’s trumpet turns into chocolate, causing him to ruin his part, and all the kids laugh at him. At Susan Buttercup’s birthday party, John ducks for apples with Susan, only to turn all the water to chocolate. Susan’s dress is ruined as a result, and John flees the party.

John meets his father on his father’s way home from work. Mr. Midas brings his son to the doctor at once, who proclaims John has a never-before-seen disease. At home, John’s mother is very upset, so John kisses her cheek, only to have her turn into a chocolate statue. John rushes back to the candy store to plead for his mother’s life. The store owner is impressed with John’s caring for others, and gives John a second chance to live life honestly and selflessly. At home, John’s mother is back to normal, and has no idea what has happened. John is overjoyed, so he rushes back to the store to say thank you, only to discover a vacant lot with a sold sign posted on it.

More summaries and resources for teaching or studying The Chocolate Touch.