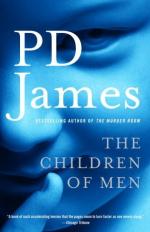 The Children of Men Summary & Study Guide includes comprehensive information and analysis to help you understand the book. This study guide contains the following sections:

This detailed literature summary also contains Topics for Discussion and a Free Quiz on The Children of Men by P. D. James.

The Children of Men is a dystopian novel, set in a less-than-ideal world of mass infertility. In this setting the reader follows Dr Theodore Faron, a doctor of philosophy and a historian of the Victorian age at Oxford University. Theo leads a solitary life. Even when he was married he was not close to his wife or his daughter. When he joins a group of vigilantes who are standing up to his cousin, the Warden of England, Theo learns how to be passionate, for good or for bad.

The year is 2021 and the human species is dying out because men are infertile. The world has sunk into a depression. In Britain, the masses are appeased by the Warden, Xan Lyppiatt, who maintains the workings of a functional society in a doomed civilization.

Theo is approached by a group of dissidents. They believe Xan is a dictator. They want Theo to approach Xan and the Council with their demands before they launch their revolution. Theo agrees, as he is drawn to one member, Julian. As Theo expects, Xan will not meet the demands, which include shutting down the penal colony where convicted criminals are sent, putting an end to the organized suicide of the elderly and dependent, and holding an election. When Theo tells the group, who have called themselves the Five Fishes, they decide to move ahead with their revolution, which involves distributing political pamphlets and destroying wharves where the mass suicides are held.

Theo is confused about his feelings for Julian and is spooked by a visit from the State Security Police. He decides to travel around Europe for a number of months. On his return, he finds the revolution has continued in his absence. After a couple of weeks, Miriam arrives to ask him for help after one of them is arrested. Theo agrees, motivated by his feelings for Julian.

Theo finds out that Julian is pregnant. They are on the run from the SSP: Luke, a priest, Miriam, a former mid-wife, and Rolf, Julian's husband. Theo dislikes Rolf because of his relationship with Julian and his hunger for power. The feeling is mutual. Rolf ends up betraying the group to the Warden after Luke is bashed to death by the Omega and it is revealed he was the father of the unborn baby.

Miriam, Theo, and Julian must find a safe place for the birthing. Theo takes the women to woodland near Oxford. They set up camp in a woodshed where Miriam delivers the baby. When Miriam goes to fetch water she is garroted, presumably by Xan.

Xan and Theo have their final face-off outside the woodshed. They shoot at each other but Xan misses, while Theo hits his cousin in the heart. Theo takes the Coronation Ring from his dead cousin's finger and places it on his own. He shows the baby to the Council. In his new emotional state of being, he has found both love and power.

The Children of Men from BookRags. (c)2022 BookRags, Inc. All rights reserved.