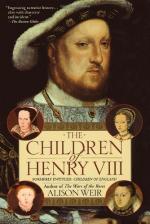 The Children of Henry VIII Summary & Study Guide includes comprehensive information and analysis to help you understand the book. This study guide contains the following sections:

This detailed literature summary also contains Topics for Discussion and a Free Quiz on The Children of Henry VIII by Alison Weir (historian).

"The Children of Henry VIII" chronicles the reigns of his immediate successors, Edward VI and Mary I. Edward takes the throne as a nine-year-old child, and his court is rife with politics and intrigue. His uncles Somerset and Seymour battle over his influence and affection, and the young King is victim to abortive plots to take over the throne. He shows early strength and promise of representing England well, and plans to uphold and further his late father's religious reforms. Unfortunately the young King contracts tuberculosis, or consumption, and dies at fifteen. The Lady Elizabeth is his favorite sister, as she is also Protestant. Elizabeth suffers a scandal as a young girl: The Admiral Seymour plots to marry her after his wife Katherine Parr dies, and become King himself. After the scandal blows over, Elizabeth makes known her aversion to marriage, which may have originated from her mother and Katherine Howard's deaths, which she experiences as a child. She endeavors to be seen as a prim Protestant maiden, especially if she is to one day become Queen of England.

After Edward's death there is an attempt to put Protestant Lady Jane Grey on the throne instead of the Catholic Mary. The Duke of Northumberland marries Jane to his son Guilford and places them both on the throne, though England rallisd for Mary and they are deposed in nine days. Jane is committed to the Tower and though Mary does not want to execute the innocent young lady, she is left no choice but to make an example of the incident.

Mary is determined to restore England to the Catholic fold. She marries the Catholic prince Philip of Spain, son of her longtime confidante and father-figure Charles V, Holy Roman Emperor. The Spanish marriage is extremely unpopular with the English people, who fear being dragged into wars and made into a satellite nation of Spain. Mary falls in love with Philip, who uses her feelings as a bargaining chip against her. Mary works to bring about a reconciliation with Rome and provide the kingdom with a Catholic heir. She suffers from two phantom pregnancies that affect her physically and mentally, wearing her down.

Once Philip loses interest, Mary turns more and more to religion for her comfort. She begins burning heretics in England, and considers it her divine duty to root out heresy wherever it may lie. This cruelty makes her very unpopular with her subjects, and later generations will nickname her "Bloody Mary."

Toward the end of her life she is pressured to name a successor. Elizabeth is the obvious choice but Mary is reluctant because Elizabeth is Protestant. She makes her half-sister promise to uphold Catholicism in England before finally naming her successor. Mary dies among her ladies during mass. There are celebrations in England upon the news of Elizabeth's succession.