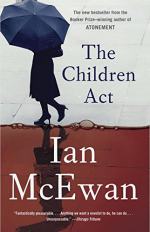 This detailed literature summary also contains Quotes and a Free Quiz on The Children Act by Ian McEwan.

Fiona Maye is a high court judge who works in the area of family law in London, England. In Chapter 1, Fiona’s husband Jack – a university lecturer – startled her by requesting that Fiona give him her permission to have an extra-marital with a 28 year-old statistician called Melanie who Jack had met through work. Fiona was very angry about Jack’s request and told him that she would not give her permission and that if he went ahead with the affair it would be the end of the marriage.

Jack and Fiona’s argument was interrupted by Fiona’s clerk, Nigel Pauling, who called to tell Fiona about an emergency case which would be brought before her in court the following day. A 17 year-old Jehovah’s Witness was refusing a blood transfusion on religious grounds and the hospital where he was being treated were going to court to seek the right to force the boy to have a blood transfusion against his will, so that his life could be saved. Later, Fiona noticed Jack had left their shared apartment and was walking down the street with a suitcase.

In Chapter 2, Fiona reflected on the fact that her dedication to her career had meant that she and Jack had never had any children, which Fiona regretted. Once at work, Fiona called a locksmith and had the locks changed to her and Jack’s apartment. Fiona heard the opposing arguments in the case of Adam Henry, the boy who was refusing a blood transfusion, and made the decision that she wanted to meet Adam before reaching her verdict.

In Chapter 3 Fiona visited Adam in hospital and the pair struck up an unlikely friendship. Adam read aloud some poetry he had written and played some music on his violin for Fiona. Fiona accompanied Adam on the violin by singing. Fiona returned to court where she delivered her verdict that Adam should have the blood transfusion. When Fiona returned home, Jack was waiting for her on their doorstep with his suitcase.

In Chapter 4, Fiona went to Newcastle, a city in the North of England, for work. Adam followed Fiona there. He told Fiona that he had lost his faith since his blood transfusion and asked her if he could come to live with her and Jack. Fiona refused and sent Adam away but before he left, they kissed.

In Chapter 5, Fiona worried that someone would find out about her kiss with Adam and that it would ruin her career. Adam sent Fiona a poem in which he compared Fiona to Satan. Fiona performed at a Christmas concert alongside a fellow legal professional and, just before she went on stage, she was informed that Adam had died. Adam’s leukemia had returned and he had once again refused a blood transfusion but he was now 18 and there was nothing the law could do to stop him. Fiona expressed her grief about Adam’s death to her husband Jack thereby re-establishing the emotional connection between the couple.