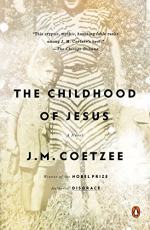 Related Topics
The Schooldays of Jesus

J. M. Coetzee
This Study Guide consists of approximately 38 pages of chapter summaries, quotes, character analysis, themes, and more - everything you need to sharpen your knowledge of The Childhood of Jesus.

The Childhood of Jesus Summary & Study Guide includes comprehensive information and analysis to help you understand the book. This study guide contains the following sections:

This detailed literature summary also contains Quotes and a Free Quiz on The Childhood of Jesus by J. M. Coetzee.

A man and a boy arrive at a Relocation Center in a city called Novilla. They have travelled there from a camp called Belstar, where they were given new names, assigned approximate ages, and taught how to speak Spanish. Now, as 45-year-old Simon and five-year-old David, they arrive in Novilla to begin a new life.

They are given temporary accommodation and Simon is assisted in his search to find work. Simon begins a job hauling sacks of grain at the docks where his foreman, Alvaro, agrees to watch over David while Simon works. Simon plans to assist the boy in finding his mother although neither of them knows her name or what she looks like. Despite this lack of information, Simon is confident that he will know who David’s mother is when he meets her. Soon, the pair is assigned their own apartment in a place called East Village, where David befriends another young boy called Fidel and Simon begins a relationship with Fidel’s mother Elena.

One day, during a hike in the countryside, Simon and David come across a luxurious building known as La Residencia. They see some people playing tennis within the grounds and Simon is instantly convinced that the woman, Ines, is David’s mother. Simon convinces Ines to become David’s mother. Simon moves out of the apartment in East Village and Ines moves in with David. The other adults in Simon’s life are dismayed by his decision to allow a stranger to take care of David without any evidence that she will treat him well. Elena does not believe that Ines takes care of David as well as Simon used to. Initially, Ines refuses to let Simon spend any time with David, but Alvaro intervenes on Simon’s behalf and he begins to spend more time with the boy again.

Ines believes that David is unusually gifted and that his innate intelligence means that he doesn’t have to learn to read and write. Simon tries to correct this by teaching David to read using a copy of “Don Quixote” but David insists on his own unusual methods of reading and writing. When the time comes for David to begin school, his refusal to read, write, and count in a standardized way gets him in trouble with the school authorities who take David away from Ines and Simon and send him to a residential school elsewhere. David runs away from the school and Ines and Simon flee Novilla with David so that the school authorities cannot take him away from them again.

Simon, David, Ines, and a hitchhiker named Juan whom they pick up during the journey, travel together to a new city where they plan to begin a new life.

More summaries and resources for teaching or studying The Childhood of Jesus.

The Childhood of Jesus from BookRags. (c)2022 BookRags, Inc. All rights reserved.